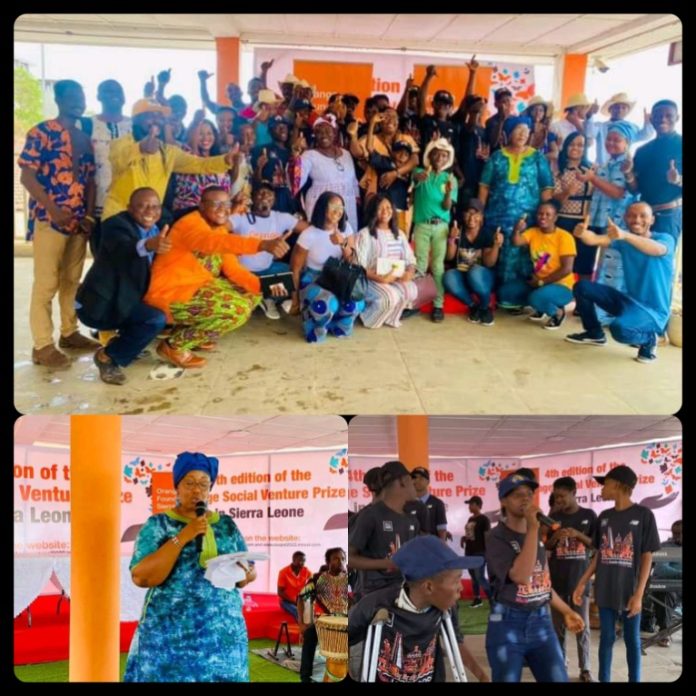 World Autism Awareness Day is observed on April 2nd every year across the world, and it is a day which recognizes and spreads awareness for the rights of people with autism.

Orange Foundation on the 6th of April, 2022 partnered with the Sierra Leone Autism Society (SLAS) and other organizations to launch a helpline for people living with Autism. The launch and Film Screening of a movie titled “The reason I jump” took place at the company’s headquarters on Hill Station in Freetown.

This helpline, 504 , it was stated will enable people to call and report cases of people living with the disorder for them to get the  necessary help that they need as most times the victims are associated with demons.

Autism is a developmental disorder of variable severity that is characterized by difficulty in social interaction and communication and by restricted or repetitive patterns of thought and behavior.

Director of Digital Transformation, Madam Finnah Tucker, applauded all those who see these kids as an integral part of the society disclosing how they are doing their best to make the victims or sufferers feel happy and welcomed.

She asserted that if everybody could see them as just happy kids they could go the extra mile and do whatever they have to do to make them even happier.

Madam Finnah intimated that anyone has autism is not by his or her own making  but rather  are  suffering from something they don’t even know about adding that it is most times caused by a neurological developmental disorder.

She affirmed that Orange SL, as a family, cares that there are people suffering from the ailment revealing how they are lending a hand for them to be part of their family and ensure that they will do whatever they can to make them feel belonged.

She mentioned that 1.2 percent of the world’s population has autism continuing that they experience difficulty in interacting socially, they avoid looking in people’s eyes amongst others and encouraged all to be patient with them and show them love to make them feel as being part of society.

“They are actively involved in anything they set their minds to do,” the Director stated.

Highlighting the positive works of SLAS and its impact, Mrs. Mary Penn-Timity, the Founder of the ‘Sierra Leone Autistic Society’ (SLAS) and the ‘Browne-Penn School’, the country’s first ever school for children with autism and other developmental disabilities – acknowledged her delight to see so many people patronizing with the Autistic society. She expressed her gratitude to the Orange Foundation for their strong partnership and solidarity.

Mrs. Mary Penn-Timity asserted that in the world of autism rigidity doesn’t count and everyone should be patient with people suffering from autistic disorder and show them love and support. She added that World Autism Awareness Day is to show the world that children suffering from Autism are also capable of doing things just as normal human beings.

Minister of Social Welfare, Honorable Baindu Dassama, in her keynote address said she is grateful to Orange Foundation and SLAS for launching the Helpline, stating that she had worked with children with Autism before, while she was a teacher in the United Kingdom and knows the difficulty their care givers and parents face.

She maintained that autism is a forgotten reality and that is why she is personally delighted to continue discussions around the disorder.

She averred that it is their responsibility to ensure a safe environment and the well being for all children and no child should be left behind.

Madam Baindu Dassama Kamara, acknowledged that the theme for this year’s celebration is ‘Inclusive Education’, as children with Autism are most times excluded from the educational processes and it is something that the Government is seriously looking into. She urged other institutions and NGOs to come onboard and spread the awareness level of Autism in Sierra Leone – supporting children and people with Autism is very expensive, so collective collaboration is a huge boost in tackling the issue of Autism

The screened movie “The Reason I Jump” is a film about children living with the disorder, their behaviors and the difficulties their parents are going through.

The event was climaxed with performances by children living with the disorder as well as children from the deaf and dumb school plus an outstanding performance by the One Family Band.