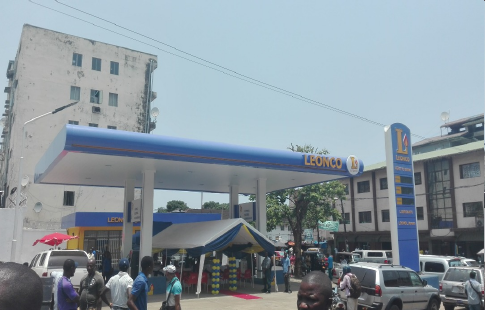 Thursday 18th April 2019 marked a milestone in the operations of one of the country’s petroleum companies, Leonco Oil, another indigenous oil company when it officially opened a state-of-the art filling station at King Jimmy, Pultney Street junction in Freetown.
From an investigation conducted by this medium it was realized that Leonco Oil Company is one hundred percent owned by Sierra Leoneans with the main objective of competing doggedly with foreign owned oil companies in the supply chain of fuel within the country.
Ibrahim Durosimi Cole, Managing Director of Leonco oil Company, while delivering a statement during the official opening revealed that they are ready to diligently serve the people of Sierra Leone by offering qualitative services.
The MD applauded the shareholders for its determination as well as the Management and Staff further highlighting that with support from private entities and Government agencies the company has made considerable progress.
Ibrahim Cole praised Government’s support for facilitating and supporting the Local Content Policy also enjoining that efforts must be made to deepen it as
for continued implementation of policies to promote Local oil businesses like Leonco Oil Company in the country.
He thanked the Minister of Trade and Industry, Peter Bayuku Conteh and his Deputy for their constant engagement in the drive to support not only Leonco Oil company but the entire oil marketing industry in Sierra Leone.
As an industry, he said they have seen the Minister truly positioning the country to be open for business; pointing out that his strides to help businesses succeed are unmatched.
The Leonco MD further commended the Minister for his calm nature and solution-oriented approach to every issue that comes to his table pertaining the industry.
The Minister of Trade, Peter Bayuku Conteh, expressed happiness to celebrate with Leonco Oil Company for opening another filling station which he said is in line with the President’s New Direction for promoting trade in the country. He said his ministry was proud of Leonco for being 100% indigenous oil company pledging to do everything possible to promote and protect their business.
He revealed that government is desirous of seeing an economy largely controlled by Sierra Leoneans and that it is his ministry’s responsibility to promote and protect business(s) owned by Sierra Leoneans. He added that the Ministry would unconditionally help the company make its mark in the country.
The Minister expressed satisfaction that Leonco Filling station is of international standard, having all the safety measures in place but urged them to work within the laws of the land.
The Executive Chairman, Petroleum Regulatory Agency, Brima Baluwa Koroma expressed thanks and appreciation to the management of Leonco and all those who contributed directly in transforming this gas station into a tangible reality.
He added that the oil and gas sector is at the forefront of creating sustainable energy solutions, reducing energy emissions and energy efficiency. He registered his commitment to provide the enabling environment for investment in oil and gas sector in the country. 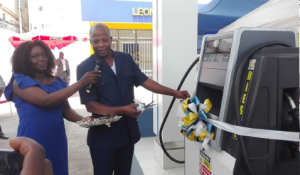