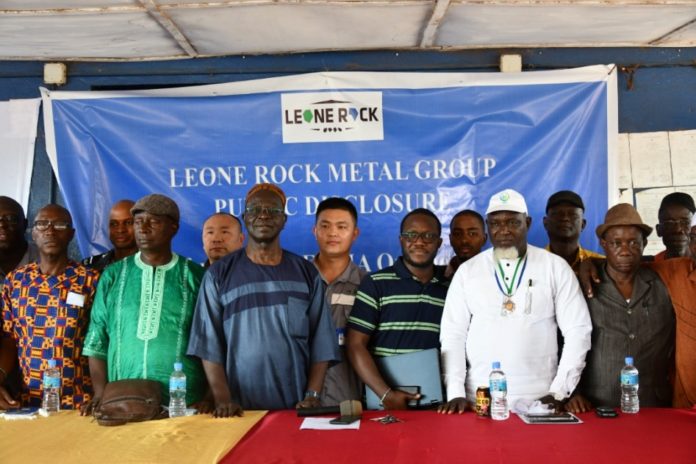 During a public disclosure by the Leone Rock Mining Company Limited as an addendum to its current Environmental and Social, Health Impact Assessment (ESHIA) for the construction of a Tailings Beneficiation Plant at the Tonkolili Iron Ore Mines the company got a unanimous approval from stakeholders of the mining concessions chiefdoms of Sambaia, Simiria and Dansogoia.

The meeting, which took place on Saturday 30th April 2022, at the court Barry in the Bumbuna Town, Chiefdom headquarter of Dansogoia saw representatives from the various mining communities together with officials from the Environmental Protection Agency (EPA), Leone Rock  Mining Company and GeoMining Consultancy engaging in fruitful discussions related to the implementation of the Tailings Beneficiation Plant project.

Speaking on the need for the addendum meeting, Sheku Kanneh, Director of EPA said already Leone Rock Mining Company has an existing ESHIA. He said, as part of their regulatory framework, they have made it clear that any mining company that wants to bring in new developments into its operational site must do an environmental impact assessment which they at EPA will look into and advise accordingly.

Consequently, he said they were gathered to witness Leone Rock Mining Company, through its Consultant which is the Geo-Mining Consultancy to publicly disclose the new development it wants to undertake in its operational site.

On his side, PC Alimamy Bockarie Yallan Koroma of Dansogoia Chiefdom said, on behalf of the mining communities, they are happy for the implementation of the Tailings Beneficiation Plant project. He expressed optimism that the plant project will create more job opportunities for people in the operational communities adding that the Project is a sign that Leone Rock Mining Company is indeed in their communities to stay, furthering that such a project will bolster their confidence in the company that in the short run a smelting plant will be installed at the Tonkolili Iron Ore mining site.

On behalf of Leone Rock Mining Company, Engineer Samuel Kamara, who is the Mines Compliance Manager of Leone Rock Metal Group, the parent company of Kingho Mining Company, said  the company values its operational communities and the environmental impact of its activities on those chiefdoms. He spoke about the vision of the company in trying to optimize the iron ore grade currently mined at the Tonkolili Iron Ore site to a globally competitive grade.

He allayed the fears of the community that the Tailings Beneficiation Plant Project will not require the use of any chemical that may cause health hazards to the community and assured that the company is very compliant in terms of upholding the laws of Sierra Leone.

Fuad Yusif Bangura of Geo-Mining Consultancy did a PowerPoint presentation targeting the community residents explaining about the entire Tailings Beneficiation Plant Project. In his description, he said that the Iron Ore Beneficiation Plant in Tonkolili is expected to start operation immediately after the approval by EPA adding that the main objective of the process is to beneficiate Iron Ore grade to a commercial-grade through the elimination of certain minerals.

He continued  that, “the present processing plant typically works with primitive technology of simple crushing and screening/sizing and has limitations in terms of beneficiation and efficiency.”

As a result, Fuad added, with the introduction of the new technological process the current tailings discharge can be used immediately to recover additional iron ore. “This means overall recovery of the company’s wash plant may improve up to 60% to 70% iron ore recovery. The tests results having been found to be encouraging and it was decided to invest and implement the project,” he stressed.

After the presentation, comments and questions were asked by community stakeholders which were responded to by officials from EPA, Geo-Mining Consultancy and Kingho Mining Company.

The programme ended with the communities overwhelmingly approving the installation of the Tailings Beneficiation Plant at the New Tonkolili Iron Ore Mines.