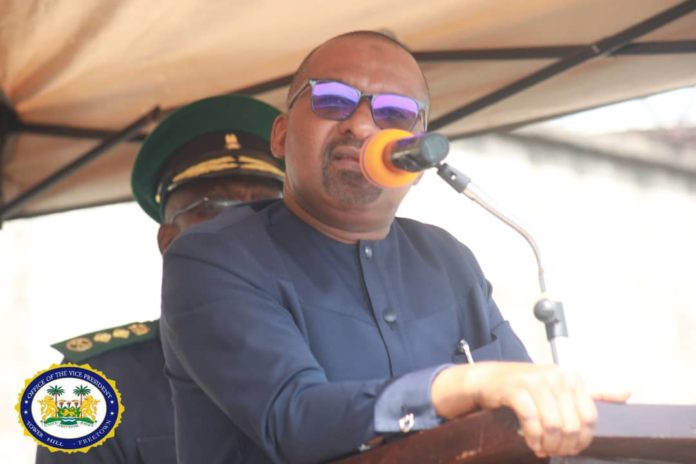 The Vice President of the Republic of Sierra Leone, Dr. Juldeh Jalloh, who also doubles as the Chairman of the Correctional Council, on 12th May, 2022 paid an official visit to the Female Correctional Centre situated at the former Special Court at New England Ville in Freetown.

Welcoming the Vice President, the Director General of the Sierra Leone Correctional Service, Joseph Lamboi, said they are honoured to receive in their midst such a high profiled personality adding that they are eager to know  what advice he has to offer or assurances he will make to put them in a good stead for them to move forward.

Explaining the purpose of his visit, the Vice President stated that he deemed it fit to interact with them in order to discuss plans that are in the offing to be rolled out and other pertinent issues related to improve the Correctional sector.

He apologized for not paying them frequent visits but intimated that he has been closely following activities and developments that have been taking place recently within the Correctional Services.

Dr. Juldeh informed the Management and other ranks of the Correctional Services that the President is committed to improve the overall welfare of Security forces in the country in terms of improved salary conditions, providing more vehicles and enhancing infrastructure in various locations where there are Correctional Centres.

He recalled how few months ago Government provided vehicles for the senior staff as well as for the movement of prisoners to and fro attending court sittings and for other purposes.

The Vice President revealed that steps are being taken to relocate the Male and Female Correctional Centres to a more ideal and spacious location in order to reduce overcrowding but was quick to underscore that to achieve such is a huge investment which will require millions of dollars.

He also revealed that improvement to increase the human capacity of the Centre is far over due further disclosing how the Government is presently on the verge of recruiting one thousand additional prison personnel further disclosing that another set will be recruited not in the distant future.

The Vice President appealed to the current personnel of the Sierra Leone Correctional Services to continue to exercise patience for now saying all is not rosy but assured them that President Bio has a keen interest in improving conditions of service for all the security forces in the country highlighting that he is really taking that seriously.

“As Chairman of the Correctional Council I have witnessed series of untoward actions bordering on indiscipline and misconduct which are somehow undermining the reputation of the security sector in the country,” the Vice President lamented adding that security or prison officers are expected to look after criminals and not to become criminals.

He warned against the importation of contraband items like marijuana amongst others into prison facilities and gave a stern warning that any personnel who falls short, bordering on misconduct or indiscipline, will be seriously dealt with.

The Vice President said complaints of indiscipline that will reach the Council will be referred to a Sub-Committee that has been established to investigate such matters and if any officer is found guilty he or she will be dismissed immediately or prosecuted depending on the magnitude of the offence committed.

He also informed of having access to the files of all prison personnel saying a personnel’s conduct will determine whether he or she will be promoted or demoted maintaining that it is another strategy to weed out the bad eggs within the Correctional Services.

One of the Prison Officers, Kadie Sesay, expressed some of their constraints, on behalf of her colleagues, mentioning limited quarters for personnel saying most of them are paying rents out of the meagre salaries they receive which she emphasized cannot make ends meet.

David Dauda Kamara, another Prison Officer also pleaded for the harmonization of their salaries saying some are receiving salaries which are not reflective or commensurate to their positions.

In his response, the Vice President stated that he has heard their cries and assured them that they are working assiduously to ameliorate those constraints.

The climax of the Vice President’s visit was holding a private discussion with the Management of SLCS.