By Mohamed Sankoh (One Drop)

Whilst many families in the northern city of Makeni are still grieving over their loved ones who were allegedly gunned down in gangland style by government security forces in the name of “peacekeeping” over a generator that could not even provide adequate electricity supply for a two-star hotel in The Gambia; I was, and still, expecting the First Lady of the Republic of Sierra Leone, Fatima Bio, to have openly sympathised with the people of Makeni.

But it appears as if the lives of those compatriots who were wasted in Makeni, few weeks ago, do not matter because they were either not supporters of the ruling Sierra Leone People’s Party (SLPP) or simply because they appeared to have committed the unpardonable crime of being born and bred in that northern city. As I always write, what is good for the heifer must also be good for the cow. You cannot be the First Lady of the Republic of Sierra Leone yet you are blatantly showing preference for some regions with her people as against others and their people. Had those killings occurred in the southern city of Bo or the eastern city of Kenema; our First Lady would have unquestionably been “too full of the milk of human kindness” (to borrow from Shakespeare’s Lady Macbeth in the play “Macbeth”) to the bereaved.

Sympathy is one of the traits that should be imbued in a mother-figure such as a First Lady. But whilst the bereaved families in Makeni are yet to get even a word of sympathy from the First Lady; she has already sent her condolences to bereaved families in faraway Beirut in Lebanon. On Tuesday this week, she allegedly took to Twitter and tweeted that, “May the souls of the departed Rest in Peace, as we wished the wounded quick recovery. I pray that Allah give solace and fortitude to my Lebanese brethren as we all come to terms with this tragedy.” Oh, really? So, what happened in Makeni, few weeks ago, was a comedy and what occurred in Lebanon was, and still is, a tragedy?

If such a tweet really comes from Madam Fatima Bio’s Twitter account, then it just shows the derision which many members of the Bio-led administration have for the people of, and in, the north-western parts of the country. If she could have time to instantaneously respond to the aftermath of an explosion in the Middle East, in less than 12 hours after the incident occurred and sympathised with faceless Lebanese nationals who never voted for her husband, yet snubbing the bereaved in Makeni which is figuratively in her courtyard; then it shows the current thinking of State Lodge!

As I noted in my One Dropian dropping of last week, I will suggest that Madam Fatima Bio either finds a good Media Communications specialist or go to the Ministry of Foreign Affairs for a crash course on the etiquettes of diplomacy! For Common Sense dictates that such a tweet, if really it is from the First Lady (maybe her account was hacked, I hope so!), should have come from either the Office of the President or the Ministry of Foreign Affairs. It is a matter of common sense.

Anyway, what concerns an old toothless woman with chewing gums? Nothing! Except that she would be putting up the pretences of chewing gums just to play to the gallery or compete with damsels. If Madam Fatima Bio could find it difficult to sympathise with the bereaved in Makeni, whose loved ones were allegedly killed by “peacekeepers”, yet have the time to do so to faceless Lebanese who died or wounded accidentally from a blast; then it really shows that the lives that were lost in Makeni do not matter to her or her SLPP folks!

And as if to show more disdain for the people of Makeni, it is now being alleged that residents are now frightful of being arbitrarily arrested by the Sierra Leone Police if caught with any T-shirts on which it is written: “Makeni Lives Matter.” When has that become a crime in Sierra Leone? Is that not criminalization of Freedom of Expression? And as if to insult the bereaved in their grieving, the corpses are yet to be returned for befitting funerals as of the time of writing this One Dropian dropping.

But with the Bio-led administration, democratic Rights and Freedoms have been turned on their heads in the country. Everything seems abnormal in present day Sierra Leone. Organised chaos seems to be the new normal of which Madam Fatima Bio appears to be the protagonist. It is as if whenever the First Lady sneezes; most members of the Bio administration are so afraid of being infected with the Coronavirus (figuratively, of course) that they are thanking their stars that masks are now in vogue!

At times, whenever I have the misfortune of reading any of the First Lady’s posts on social media; I really appreciate the cardinal reason why her husband is putting more emphasis on Free Quality Education. After all, charity should begin at home. 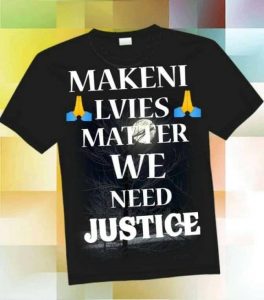