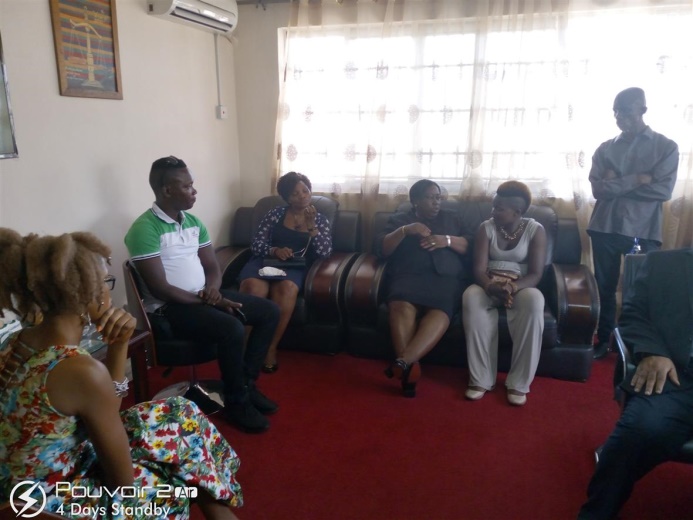 On Tuesday, November 2019 representatives of the Marie V Entertainment from Magburaka called on the Executive Director of the Legal Aid Board, Ms. Fatmata Claire Carlton-Hanciles and team to provide feedback on the issue of illegal arrest and detention of mostly women who default in repaying micro-credit loans and debts in Magburaka.

Ms. Carlton-Hanciles raised the alarm bell in an address at the launch of the National Market Women Organization (NMO) – Tonkolili Branch in Magburaka on 26 October 2019.  As Guest Speaker, Carlton-Hanciles had warned the Police in Magburaka against illegally arresting and detaining women for defaulting on repaying their micro-credit loans or debts.

The Marie V Entertainment comprising Marie Veronica Bangura, Angela M. Kanu, Rugiatu Barrie and Abass Bangura were happy to report to Mrs. Carlton-Hanciles that the situation has improved dramatically since her last visit to the town for the launch of NMO. According to Marie Veronica Bangura her group has been sensitizing the women on this issue so they do not fall prey to these police officers.

Mrs. Carlton-Hanciles said the fact that the campaign is led by a youth organization gives her hope. “I am happy you have taken up this fights to protect the rights of our vulnerable women,” she said. “We know women default in repaying debts because the interest rate is too high and the conditions for repayment are such that they could hardly meet them.”

She said she received several complaints from women she had interacted with during the launch that police officers were being used by microcredit institutions and debtors to recover debts and in doing so they detain them sometimes for weeks to force them into repaying the debts.

“I was reliably informed that Police Officers were given a percentage of the money recovered from these women,” she said. “In most of these cases, they only release the debtor from detention after they have done part payment and this pattern will continue until such a time when the debt is paid in full.”

Mrs. Carlton-Hanciles warned that these matters are not for the police as such should be referred to Legal Aid Board or the Courts. “I received too many complaints from women I met at the launch that Police Officers are being used by money lenders and micro credit organizations to recover their debts on their behalf,” she said.

She referred to a recent case in which a woman in Magburaka had to flee her home and went into hiding in a neighboring village leaving her children on their own. “This is unacceptable, it is heartless and undermines trust in the police,” she warned.

Mrs. Carlton-Hanciles seized the opportunity to call on the Police to stop getting involved in matters involving a civil transaction such as debt. She sent out this message which she had sent to the LUC in Magburaka: “Defaulting on repaying microcredit loan or debt is not a crime and as such police officers should not be involved in it.”

She drew attention to the fact that there are several women detained illegally because they cannot repay debts. “As we speak, there is a matter at the Ross Road Police Station in Freetown involving one Susina Dumbuya who was detained for nearly two weeks for defaulting on a debt,” she said adding, “We call on the LUC at the Ross Road Station to ensure this case is referred to the Court or the Legal Aid Board immediately to avoid our intervention.”

The visit was climaxed with a Temne song emphasizing the importance of blessing and voiding curse in all our undertakings.