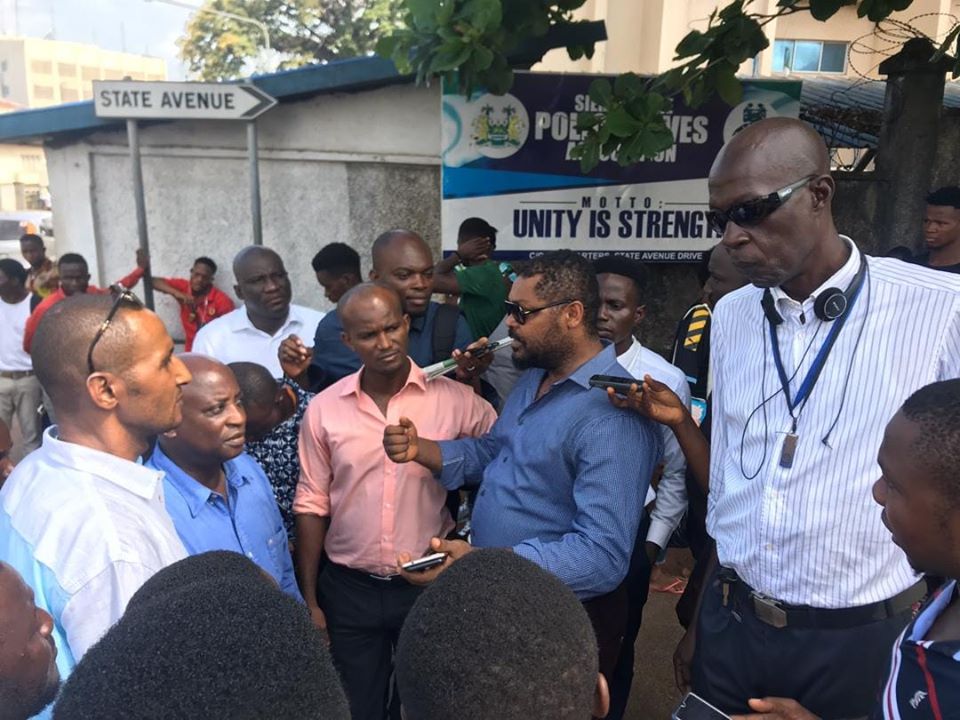 In the wake of the arrest of ,Salieu Tejan Jalloh, Proprietor of Times SL Newspaper on Monday 11 November 2019 and detention at the Criminal Investigations Department (CID), for almost 24 hours, the Sierra Leone Association of Journalists (SLAJ) has issued a strong worded Press Release calling on the Police and Politicians to respect media freedom.

Signed by the National Secretary General of the Association, Mohamed Asmieu Bah, the Release stated among other things that SLAJ is pleased to officially inform its membership and the general public that Salieu has been released on bail through the intervention of the Association and the Ministry of Information and Communications.

It went further to mention that, Salieu Tejan Jalloh, spent almost 24 hours in detention at the Criminal Investigations Department without any official charge or reason for his arrest.

The Association maintained that while it totally condemns the manner in which the Police moved in to arrest and lock up the journalist, who did not publish anything malicious or defamatory other than trying to crosscheck information that he had; it believes such is a standard journalistic practice.
In the release it was also highlighted that the journalist alleged that the police officers who arrested him went to his office at Soldier Street, Freetown, on the pretext of wanting to place an advert in his newspaper, and manhandled him in the process of effecting an arrest.

SLAJ says it is particularly concerned that such is coming at a time when the Government has shown great commitment to repeal the obnoxious Criminal Libel Law and promoting media freedom.

The release ended with SLAJ reiterating how it will continue to engage the Police and called on our membership of the Association to always practice within the parameters of the SLAJ Code of Ethics and the Independent Media Commission’s Code of Practice.

President of SLAJ, Ahmed Sahid Nasralla strongly condemned the actions of the Police. This was what he said: “The action by the Sierra Leone Police was absolutely wrong and we totally condemn it. It is time to break this unholy partnership between the police and politicians locking up journalists from time to time using the Criminal Libel Law. The Police must understand that we are law abiding citizens and we are not criminals,” said the President of SLAJ, Ahmed Sahid Nasralla.

On the same issue that led to the arrest of Salieu Tejan Jalloh, the Anti –Corruption Commission (ACC) also came out with a Press Release titled:  “ACC Enquires into Allegations of Corruption against Chief Minister”.

In the release the Commission also pointed out that in light of recent allegations of corruption against the Chief Minister, Professor David John Francis, it wishes to inform the general public that it has accordingly taken appropriate action. It was established that Professor Francis himself contacted the Commission following a text message he received from Salieu Tejan-Jalloh, Managing Editor of The Times Sierra Leone Newspaper, alleging that a total of US$1.5M was paid into his Ecobank account as bribes.

The ACC furthered that the Chief Minster accordingly informed the Commission, acting in accordance with Section 77 of the Anti-Corruption Act 2008, which imposes a duty on all public officers to report where a corruption offence has been committed or is about to be committed.

“Acting in consonance with Section 7(1)(b) of the Anti-Corruption Act 2008, which mandates the Commission “to investigate instances of alleged or suspected corruption referred to it by any person or authority or which has come to its attention, whether by complaint or otherwise,” the ACC accordingly contacted Mr. Jalloh to help with information to aid an investigation. Unfortunately, Mr. Jalloh refused to comply with the request of the Commission,” the Press Release continued adding how the ACC issued a Section 57(2) Notice, compelling the Ecobank to submit to the Commission all financial records and transactions of the Chief Minister.

In its response, Ecobank clarified that “Professor David John Francis does not maintain any account with the Bank.” Yet, Ecobank maintained that Professor Francis has an Ecobank CashXpress pre-paid card since August 2019. The said card, according to Ecobank, denominated only in Leones, can be issued to both Ecobank account holders and non-account holders. The investigations also revealed that since he was issued this card, Professor Francis never loaded the said card with cash and therefore never used it.

The ACC Press Release ends by encouraging anyone with evidence to pass such to the Commission furthering that by the provisions of Section 82(1) of the Anti-Corruption Act 2008, where a person discloses to the Commission that a public officer, body corporate or public body is, or has been involved in corruption, he shall incur no civil or criminal liability as a result of such disclosure.

The Commission reassured the general public of its determination to continue executing its mandate without fear or favor. 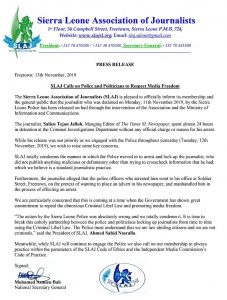