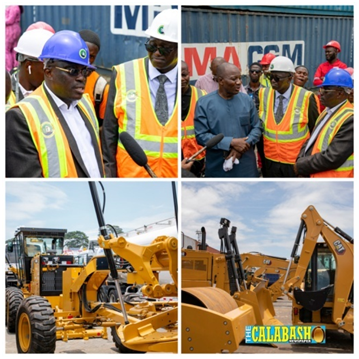 The Chief Minister, Jacob Jusu Saffa, has on the 5th September, 2022 inspected the construction equipment of Maripoma Enterprise Limited, at Queen Elizabeth II Quay, to verify and get first-hand knowledge of the volume and type of equipment the company is bringing to embark on the construction of the 42.5-kilometre road spanning from Kpetema to Mattru, in the south of Sierra Leone. The inspection exercise on Monday, August 5, 2022, was attended by engineers of the Sierra Leone Roads Authority (SLRA), the Press, Government officials, and members of Maripoma Construction Company.

The Chief Minister, Jacob Jusu Saffa, said, “As a Government, we promised the people of this country that we would fix the Bo-Mattru Road, which happened to be one of the few roads in the entire country where the districts and towns are not connected.” He stated that the 10-kilometer roads from Bo to Tinkonko have been completed, except the $24 million US dollar Kpetema to Mattru road project, which will be built by the Maripoma company.

The Chief Minister said, “This Government cares about the people of Sierra Leone, which is why our actions are based on putting words into reality. This road work project will create lots of opportunities not only for our local people within the project corridors but will also benefit the entire country as a whole,” he assured.

He noted, “The entire Bonthe district does have more than three kilometres of tarred roads. Even though it is part of the country, it is this Government that has made all the strides to give such a place a facelift. ”

Maripoma Enterprise is a Ghanaian company that won the bid for the construction of the 42.5-kilometer road spanning from Kpetema to Mattru, in the south of Sierra Leone. The company shipped their equipment to facilitate speedy and successful work on their project areas to ensure they were completed in record time.

Upon completion, it will reduce travel time, increase productivity, promote trade, and increase social and development activities in that part of the country.

A representative of Maripoma Enterprise in Sierra Leone, Mahama Ayariga, said they came with 64 units of equipment to start the road construction process, stressing, “We have imported all the equipment needed for the project.” He disclosed that their company is one of the biggest construction companies in Ghana with over 70 percent of construction sites and a large fleet of equipment as well.

He disclosed how they had been invited to several countries but decided to choose Sierra Leone based on the country’s investment climate. He said, “We are here to make a statement that Sierra Leone is a good place to do business and to also assure the Government and people of this nation that we came with double equipment to finish the Kpetema to Mattru road on time.”

The company’s vision is to set the standard for the local construction industry by delivering high-quality projects on time and with due regard to the client’s specifications and expectations.