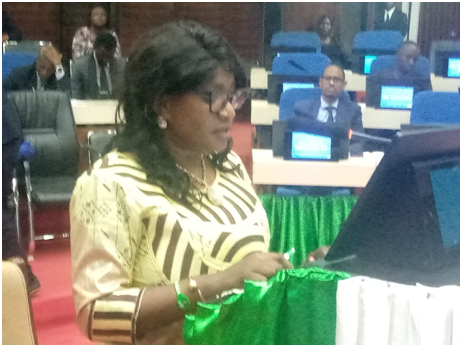 Presenting the Bill, the Deputy Minister of Local Government and Rural Development, Melrose Karmity, said the bill is to strengthen the capacity of Local Government relative to decentralization.  She said the draft bill is divided into eighteen parts and used the opportunity to highlight the importance of each part in the Bill.

The Chairman of the Local Government Committee in Parliament, Hon. Aaron Aruna Koroma recalled the passage of the parent bill and re-echoed that the bill resonates with the emerging issues and the aspect of deepening decentralization.

The MP stated that the bill is not political and went on to call on all to support the process. He recalled the consultation process stating that the Non-Partisan and educational qualification clauses for elections of  Chairmen and Councils have been removed from the bill, relative to level playing field in representation of all including women. The MP pointed out the removal of certain criteria amongst others. The composition of the Bill, in light of women’s representation he said is very laudable as it proposed a 50% women inclusion in the Local Government Service Commission and the composition of Ward Development Committees.

He spoke about the proposal of political, administrative and fiscal support for new councils. According to him, the bill is proposing some MPs to sit at Council meetings to strengthen development collaboration at local level ,adding that the bill is creating ethnic cohesion in the Western Urban and Rural as Tribal Heads and Village Headmen would participate in Council meetings at Freetown City Council and WARDC. He informed Parliament that the Local Councils elections are to be run in tandem with the general election. He went on to say,  the bill is also creating a balance of powers, proposing that, if the Chairman comes from one area, the deputy would come from another and both would be running on a single ticket. The bill ,he said, would empower councilors to monitor development, through their ward committees. He expressed proposal for the bill to provide benefits and pensions for the chairmen and mayors. He questioned the inclusion of a disqualification provision that prevent councilor aspirants from contesting when they are professionals. He suggested that, councils should collaborate with the Paramount Chiefs to raise revenue and a share to be given to the latter. The uncertainty affecting council staff members, he assured would be addressed.

He emphasized on the harmonization of recruitment, transfer to and from the national Government institutions. “If the council staff can now be transferred to another, let the staff cadre be stated or treated at par,” he informed the House and went on to say, devolution must be commensurate with budget in light of service delivering. The Chairman expressed that when they devolved services, let adequate resources be there. He suggested to Parliament to create a proviso between the councils and their devolved functions to ensure control of Local Councils over their staff. He advised the Minister and colleague MPs to look into all concerns, in order to pass the bill into law.

Hon. Joseph Bash Kamara recalled that, the parent Act was a working document and is now obsolete and underscored the modern trend.

The Deputy Whip of Opposition, Hon. Zainab Catherine Tarawally recalled his working days at the Decentralization Secretariat and the turbulent sail of the process. She spoke about the collaborative efforts of many, spanning eighteen years ago.

The Deputy Whip advanced concern over the share of market dues with the chiefs and advised the House to do some amendments, in light of the position of the Affirmative Action on gender. Several issues, she said would be addressed in line with the Gender Empowerment. “This is the bill for Sierra Leoneans” she stated and encouraged all to join them in the process.

An Independent MP from Pujehun district, Hon. Shiaka Sama expressed happiness over the inclusion of Members of Parliament in the Council meeting. The MP expressed hope that, when the bill gets to the Committee Stage let there be a strong position for oversight and also a time limit for convictions on council contestants just like others. “Let us give room for people to confess,” he maintained.

Hon. Abdul Karim Kamara, Deputy Chairman of the Local Government and Rural Development Committee in Parliament, recalled the intention of the parent document by those lawmakers who passed it into law, adding that its improper implementation had affected MPs.

He said money allocated to councils for devolved functions or services are not adequate and went on to say, councils are not receiving money to do proper service delivery on monitoring.

The Deputy Chairman said if, the people want community professionals to represent them as councilors, it is good. The transition period during elections, when Chairmen are not in the councils, the MP said caused improper accountability and suggested that, chairmen should remain in office to handover after election.”Having them to create checks and balance is good,” he stated.

The Deputy Chairman informed the House that they need to create more rooms for Councils to generate funds.

Hon. Dr. Munirr Turay said the laws are there but the system is not. He made reference to the parent act and compared it to the bill and asked rhetorically for the position of the councils in tandem with the support received. He pointed out issues including the relationship between the Chairman and Chief Administrator in terms of responsibilities and cohesion. Ministerial holding of devolution, he said is an issue and made reference to circumstances. “Is the council entrenched in our Constitution?” He asked and informed the House that the councils would not be able to deliver without entrenched laws.

Hon. Dr. Ibrahim Bum Kamara said the bill is an opportunity to strengthen the Local Council, in order  to be able to deliver services. He said the bill was a good one, but they need to look into the document for some amendments. Highlighting some of the issues, he suggested that, Senior District Officers (SDOs) are supposed to sit in council meetings just as proposed for MPs. The MP also suggested the strengthening of the professional councils’ heads to be able to deliver and chairmen and councilors to serve as checks and balances. The capacity building, he stated is very essential and also said that, education and health were key  areas that need to be supported for service delivering. The MP expressed that, some ministries need to let go some of the devolved functions to the councils. “Let all the primary schools remain with the Councils and secondary with the Ministry,” he stated and went on, “Let all the clinics remain with the councils and hospitals with the Ministry,” he revealed.

Speaking on recruitment, especially of professional staff members he suggested that, it should not be done by councils.

Leader of NGC in Parliament, Hon. Dr. Kandeh Yumkella said the bill is very good, but requires a lot of money and capacity building. The MP raised concerns and questions over constructive relationship between the Councils and devolved Ministries, as to how would the latter get the money and the transparent movement of the budget from the latter to the former.

The Leader of C4C, Hon. Saa Emerson Lamina, while responding to question and concerns raised by the previous speaker,  recalled how functions were devolved and explained how money are budgeted and programs implemented. He revealed that direct development grants stop going to the council in 2010 and reference best practices in other countries to be implemented in Sierra Leone.

The bill he said is important and related the country’s rebel war to lack of decentralization and recalled why councils came into being in 2004 and why they were dissolved in 1972. He said bill has created a technical committee that would report to the Inter Ministerial Committee, chaired by the Vice President to enhance action due diligence. The Leader said the bill is inclusive in terms of governance said and went on to say, it approves benefits, gratuity.  According to him, diagonal transfers from Local Councils to Central Government are possible. He spoke about revenue mobilization and raised concern that there was no clear Term of References for the Deputy Chairmen and pension for Chairman and Mayors. He advocated for former mayor to be given retroactive benefits and proposed for strong penalties be levied against defaulters of home source revenue. This bill he said had settled several lacunas in the old law.

Hon. Moses Jorkie said if, the bill is properly amended, it would be a good document and would support the governance. The crying of women, he said is properly addressed with the allocation of 50% power to them at ward committee. Spoke about the lethargy affecting communities and the collaborative effort of all including the Paramount Chiefs. He underscored positivity of the sale of cost recovery drugs in some hospitals by some Councils to be emulated by others.

In rounding up the debate, Acting Leader of Opposition Hon. Hassan Sesay said efforts had been made by all and expressed hope that  attention would be paid to various concerns raised by MPs would be addressed at the committee stage. “When we come to the committee stage I am sure we will do justice to the bill” he reaffirmed.

In concluding the debate, the Acting Leader of Government Business, Hon. Bashiru Silikie thanked all including the Minister and Deputy. He recalled the passage of the parent act and related it to the recommendation of the Truth and Reconciliation Commission (TRC). He spoke about the de-politicization of the council and expectations of development from MPs. He said it is timely to have professionals at the councils to reverse the expectation of the constituents that MPs are solely responsible for development, which is the responsibility of the councils.

He said many MPs were judged on platform. He expressed the view that they as MPs need to popularize the bill, especially on the functions of the councils.

“This bill when once enacted is removing development from us to the Councils,” he stated and went on to say the bill would spell out the roles of the Councils. He said the huge turnover of the Members Parliament had been as a result of the lack of explaining the functions of the Councils and stated that the bill is a good document but needs to be amended.