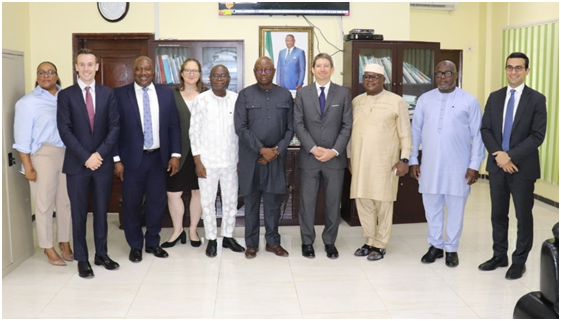 The Chief Executive Officer of the US International Development Finance Corporation (DFC), Scott Nathan. in meetings with the Ministers of Finance and Energy expressed DFC’s interest in investing in areas of Energy, Agriculture, Health, and Environment in Sierra Leone.

Scott Nathan who was in Sierra Leone on an official visit stated that this was his first visit to Africa as CEO but second to Sierra Leone, stating that his presence is to reinforce DFC’s focus on investing in low-income countries like Sierra Leone.

On the 217M US$ Western Area Power Generation Project, the CEO stated that the updates and reports he will get on the ground will be critical to the furtherance of the project.

He said they (DFC) are willing to support a project that is key to unlocking of other key economic potentials.

Dennis K. Vandi, Minister of Finance thanked the CEO for his visit and expressed delight over the interventions of DFC in Sierra Leone; and reiterated Government’s commitment to the project and future investments.

Minister of Energy, Alhaji Kanja Sesay, in his statement, said that the Western Area Power Generation Project will enrich the energy base and increase energy evacuation to the East End of Freetown.

Abu Kamara, Chairman of the Project Committee, in his update to the team, highlighted two key issues for the attention of the CEO that needs a no-objection for proposed fuel supplier and Engineering, Procurement and Construction (EPC) from the DFC’s team in the US.

The Western Area Power Generation Project provides for the construction and operation of an 83.5 MW thermal power plant that comprises the installation of general electric gas turbines, light fuel oil (LFO) storage and water treatment facilities, a new 33KV indoor substation at Kissy, Construction of 1.3km Fuel pipeline from the new jetty for the landing of the LPG/LNG to the Kissy site, an 8km reinforcement of the 33kv transmission line from Blackhall Road to Wellington substation, installation of additional 33/11kv transformers at Blackhall Road, Portee, and Wellington substations. Jetty for the landing of LPG?LNG to the Kissy site.