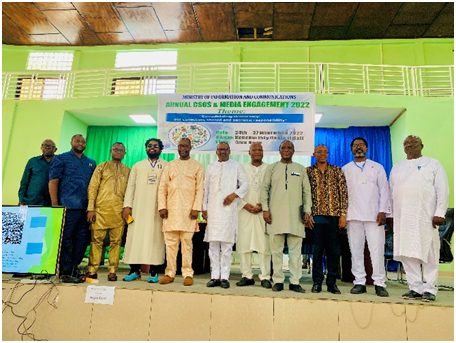 In a bid to review the key achievements of the New Direction Government headed by President Julius Maada Bio vis-a-vis his key manifesto commitments, the Ministry of Information and Communications has on the 27th of November 2022 concluded 3rd edition of a 3-day Annual Media/CSO Engagement on the theme: “ Consolidating Democracy: Our Collective, Shared and Patriotic Responsibility”.

The engagement, which is in line with the Ministry’s vision to bring information to the people and bridge the information gap between the  Government and the people ,was held at the Kenema City Council Hall.

He disclosed that Sierra Leone is the number three country in the world utilizing 22% of its GDP to invest in education because President Bio believes that human capital development is the right path to sustainable development.
According to him, the Government is taking care of 2.6 million kids from pre-primary, primary, basic and senior secondary schools in a bid to build the human resource capacity of the country.
VP Juldeh Jalloh added that Government has increased its budgetary allocation in the health sector from 6% to 11.7% with 3.4% remains to be the first country in Africa to attain the Abuja Declaration call of 15% investment from its GDP on the health sector for improved health service delivery.
As energy is key for the productive sector in the country he said President Bio’s has increased access to energy from 16% in 2018 to over 34% with over fifty towns nationwide accessing electricity supply.

He further spoke about the ongoing energy projects to light up all district headquarter towns and other major towns which will increase electricity generation, supply and transmission to 50% by mid-2023.
The Vice President reiterated on the roads construction projects and bridges that will increase connectivity of people from one chiefdom, district, region to another and neighbouring countries to enable businesses to grow in the country.

He said that the Government has invested in many reforms in the tourism, fisheries and agriculture sectors making them viable to contribute to the economic growth of the state.

“Investment in the energy, infrastructure and agriculture sector will attract many companies in the country that will create job opportunities for the people in the country. If you cannot deliver development to the people, you cannot deliver democracy in any country,” VP Juldeh Jalloh averred.
He said Sierra Leone is on record of doing extremely well in implementing Sustainable Development Goals (SDGs) and attaining other international benchmarks.
Minister of Information and Communication, Mohamed Rahman Swarray said the cardinal responsibility of his Ministry is to help bridge the communication gaps between the Government and the citizens underscoring that the Media &CSOs Engagement is one way of achieving that

He further underscored the significance of this year’s theme saying the governance of the State is a shared responsibility to ensure peace and stability stressing that without peace even the economy will not matter in the country.

Earlier speaking on the importance of the retreat, the Minister of Information and Communications, Mohamed Rahman Swarray maintained that the Government of HE President Julius Maada Bio is committed to run an open, transparent and accountable Government that seeks the best in terms of the interests of the people.

He said the cardinal responsibility of his ministry is to help bridge the communication gaps between the Government and the citizens which he said the media &CSOs engagement is one way of achieving it.

The Information Minister further underscored the significance of this year’s theme saying the governance of the State is a shared responsibility of all to ensure peace and stability stressing that without peace even the economy will not be matter in the country.

SLAJ President, Ahmed Nasralla said that the collaboration between the media and Government through the Ministry is very productive pointing out that no journalist is in jail which he said they need to celebrate compared to the past.

He said that the removal of Part five in the 1965 Public Order Act that criminalizes journalists by this Government is one of the biggest gains of the media and that has brought recognition of SLAJ and the country in many global media conferences.

Comments, clarifications, suggestions, questions and answers after presentations by MDAs’ of their achievements under this Government climaxed this year’s Media and CSOs engagement.