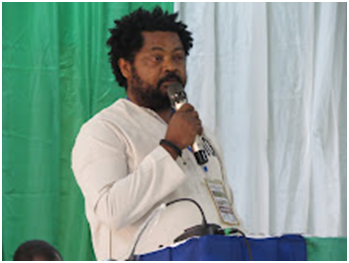 The Ministry of Information and Communications organized the 3rd Civil Society Organization & Media Engagement, with the theme  “Consolidating Democracy: Our Collective, Shared and Patriotic Responsibility”, in the Eastern Province of Sierra Leone which was held at the Kenema District Council Hall and lasted from the 24th-27th November, 2022.

In attendance were the Information Minister, Mohamed Rahman Swaray, a cross section of staff of the Ministry, other Government Officials, representatives of various Civil Society Organizations and media practitioners from different Media Houses.

Delivering a statement during the opening ceremony, the President of the Sierra Leone Association (SLAJ), Ahmed Sahid Nasralla, extended thanks to the Information Ministry, especially the Minister for organizing the CSO and media engagement for the third consecutive year.

He highlighted that the forum brings the Government of Sierra Leone (GoSL) and its agencies, CSOs and the media to track delivery of manifesto promises and provides an opportunity for the media and CSOs to interrogate activities of critical agencies of the GoSL.

The President of SLAJ, Ahmed Sahid Nasralla highlighted that over the last three to four years, SLAJ has been collaborating with the MIC to address the challenges facing the media because they believe the GoSL has a sacred responsibility to support the growth of independent and thriving media to help our democracy function well.

“We are not selling, and the GoSL is not buying,” he reiterated adding how at no point in the period of the collaboration has anyone in GoSL called journalists to influence their work or position on national issues that they feel very strongly about.

Ahmed Sahid Nasralla pointed out that they are encouraged that the media generally continues to perform the radical role of scrutinizing the collaboration, and holding the GoSL and its agencies to account on a daily basis stressing that SLAJ don’t have control over. “We don’t determine the editorial policies of the media houses operating in the country nor do we tell them what to report or not report,” he stated adding how they absolutely don’t have that power.

He intimated how there are many positives that have come out of the collaboration expressing the view that the foundation upon which they are together building a new media landscape is the historic repeal of the criminal libel law; an obnoxious law that took the country more than 50yrs to delete from its law books.

Nasralla catalogued series of positive developments that have transpired prompting him to state that there is free media here.

He stated that because of all of those achievements Sierra Leone was encouraged to join the Global Media Coalition- a high level platform where Governments engage and peer review their commitments to enhancing freedom of expression and free media.

“We have had initial meetings with the Coalition to understand their work, their objective and how SLAJ and the GoSL could benefit from their interventions” he disclosed.

Referencing the media viability and investment conference held in June of this year, he said, progress made so far after that historic conference has been very encouraging.

He said Sierra Leone has for the first time being listed as one of 17 countries in the world to benefit from the International Fund for Public Interest Media (IFPIM). According to him, in preparation for that intervention, they have worked with support of all the stakeholders, including GoSL, under the platform of the Media Reform Coordinating Group (MRCG), to begin to put the structures in place.

He intimated about the establishment of the National Fund for Public Interest Media (NFPIM), a Multi Stakeholders Board (MSB) and a Technical Working Group (TSG) to administer the fund.

Ahmed Sahid Nasralla told the gathering that a project proposal has been submitted which, when approved, will see Sierra Leone benefit from a 100 thousand United States Dollars from the international fund.

Based on what he said, 50 percent of that will go towards setting up of the structures, which have already started putting in place, and the other half will be a grant to NFPIM.

“We also expect a counterpart funding from the GoSL as one of its commitments during the conference,” he expressed optimism.

The SLAJ President underscored how this will be the first time in the history of the media in Sierra Leone that a locally-owned-and-managed Fund will be giving out small grants to media houses, or groups of journalists, that are committed to doing public interest media- embarking on in-depth and investigative reporting on governance issues of accountability, transparency, and service delivery at the local and national level.

He told the audience that meetings of the MSB and TWG have commenced to discuss the legal status of the fund; finalize the criteria, guidelines, and tools to operationalize the fund.

The President informed that a workshop on drafting the definition of Public Interest Media within the context of Sierra Leone will soon be held.

“By December 2022 to January 2023 we hope that some form of activity will commence,” he expressed hope.

He said, however, the conference also challenged the media in Sierra Leone to review their governance and leadership structures to attract the much needed investment, ensure accountability and sustainability.

It was suggested that the media should also explore new business and revenue-generation models and move away from the traditional way of doing things which is now very old-fashioned.

Also proffered was that the GoSL and its partners should work to provide scholarships, training and capacity building opportunities for journalists among other reforms he highlighted.

Campaign for Good Governance Applauds Enactment of the Gender Bill