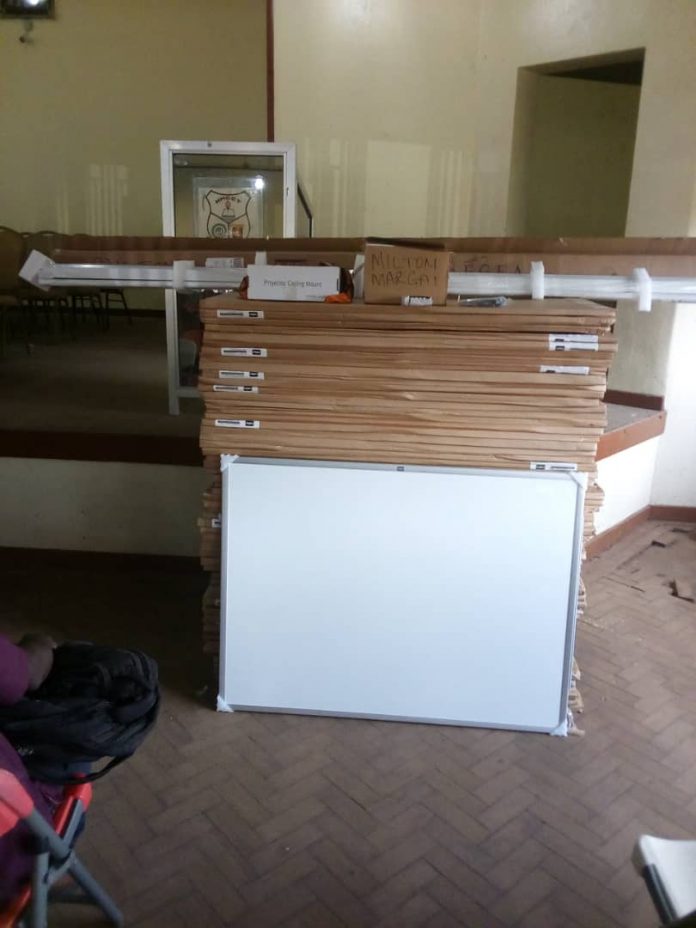 To put the tertiary institution on a good stead, the Alumni of the Milton Margai College of Education and Technology (MMCE&T) polytechnic United Kingdom and Ireland Branch on Friday 25th October 2019 donated 61 whiteboards and 300 packets of markers, dusters as well as a projector and ancillary gargets for the college’s Great Hall worth over 6,000 (six thousand Pounds Sterling) to the college administration at an impressive ceremony held at the Great Hall of the Goderich campus.

The items are to be used by the three campuses of Goderich, Congo Cross and Brookfields.

The college’s registrar, Mr. Sheriffu Bangura revealed that the occasion is another step in the transformation of the college.

The Acting Vice Principal of the college, Dr. Mohamed Alie Jalloh revealed that it is a pleasure to welcome all on the special occasion which he described as another red letter day in the annals of the college recalling that when the Acting Principal visited the United Kingdom recently, he engaged the Alumni to give back to their alma mater and described the donation as another milestone in that direction.

He further disclosed that last year the UK and Ireland Branch also donated toilets to the college that greatly helped to improve sanitation on campus, observed that the Alumni is paying back to the institution and commended them for the gesture that is helping to transform the college underscoring that the whiteboards and markers would give way to the blackboards and chalks revealing that the college now uploads lesson notes on its website.

The Acting Principal of the college, Dr. Philip John Kanu disclosed that the Alumni wants to associate with the successes and developments taking place in the college, that he is encouraged by the support he is receiving from people and institutions, that he would crush those who stand on the way of development and encouraged all to come onboard the development and transformation train assuring that the whiteboards, markers and projector would be distributed to the various lecture halls.

According to Dr. Philip John Kanu, the donation was made in record time asserting that the Alumni made a lot of sacrifices to make the donation for which the college would always be grateful reiterating that we must celebrate people when they are alive and not when dead.

He also observed that there are a good number of old students of the college in the United Kingdom and Ireland but only a few are members of the Alumni and cautioned all not be politicize the institution, that he can never be blackmailed or intimidated as has been the case since he took up office underscoring that nobody would stop the upgrading of the college to a polytechnic university.

The Acting Principal added that the college would not accept failures, warned lecturers against changing the grades of students, that some lecturers are complaining about signing the attendance register, that lecturers must work for eight hours during which they must not only lecture but also mentor students, help them with community work and research and acclaimed the Alumni for the invaluable gesture affirming that the college would continue to pray for them.

He also warned students not to use the wrong markers on the whiteboards, appealed to all to do good things for which they would be remembered, that the Alumni is very influential in lobbying to make things happen as well as support the administration to upgrade the college to the first technical university in the country that would produce quality teachers and technicians and appealed to the Alumni for more support.

The representative of the UK and Ireland Branch Alumni, Mr. Mohamed Dauda disclosed that he studied Biology and Chemistry at the college, that he benefited immensely from the college as he had a strong foundation that made him perform well in other areas underlining “do not underestimate MMCE&T. Study hard to benefit one day”.

He also informed that the Alumni was formed four years ago, that there are over a thousand members of the Alumni but only 62 committed members and assured of more donations.

The Acting Chairman of the Alumni’s National Chapter, Mr. Bob Wilson Bockarie stressed that the Alumni has a role to play to transform the college to a technical university and would champion the process, that other universities have been opened in the country without the qualified lectures and facilities, implored all to work very hard towards that drive, commended the administration for transforming the college as all can see the physical improvements taking place in the three campuses of the polytechnic recalling that the Students’ Union election is the best in the country.

In his vote of thanks, Mr. Anthony During, the Students’ Union President, assured that they would take good care of the items for posterity.

Highlights of the ceremony were the introduction of the Alumni and unveiling of the items.