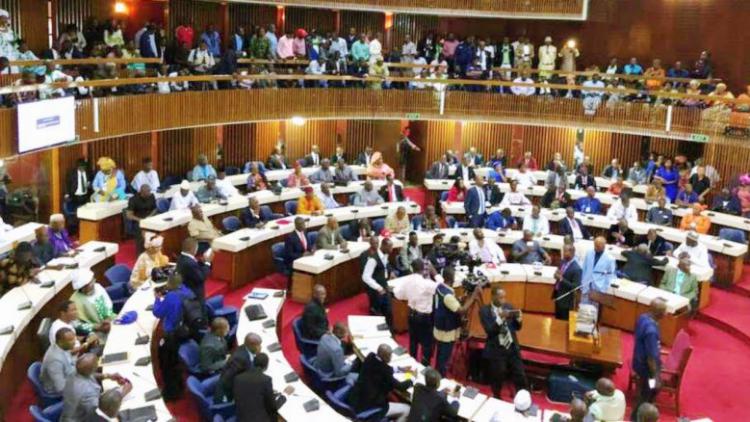 The Parliament of Sierra Leone on Friday 22nd November 2019, concluded debate on the 2020 Appropriation Act; before committal to its Sub-Appropriation Committees for effective scrutiny of various budgetary heads and estimates of MDAs and report to the House for consideration and adoption.

The Appropriation Act of 2020 seeks to authorize expenditure from the Consolidated Revenue Fund for the services of Sierra Leone and other related matters.

Contributing to the motion, Hon. Lahai Marah of APC described the budget as “dishonest and insincere” by referencing the 2019 budget and accused the current Government of accumulating more debts than the immediate past government.

Hon. Keikura Vandy of SLPP stated that the recruitment of teachers was equitably done across the country; assuring of improvement in the energy sector and the need to improve also on the deteriorating state of the Leone against the Dollar in order to revamp the economy of the country.

Hon. Abdul Kargbo of APC described the budget as “inconsistent” and accused the Ministry of Finance of making excessive payments to creditors; adding that the costs of removing containers at the ports are very exorbitant.

Hon. Dominic Tshombe of SLPP, speaking on human capital development, mentioned the efforts made by Government in the light of economic recovery for the development of the country.

Hon. Abdul Latiff Sesay called on the Government to provide for the aged who are uneducated for sustenance and to also engage those who had retired, into farming. He expressed fears for more MDAs to be included into the TSA, as those who are currently on the scheme are not being treated properly, relating to timely access to funds. He also called on the Ministry of Finance to allocate funds to MPs to undertake farming activities in their respective constituencies.

Hon. Musa Moigua of SLPP averred that the budget is in line with the manifesto of the Government being championed by President Bio under the tutelage of the New Direction relating to revenue generation and improving the economy of the country.

Hon. Catherine Z. Tarawally of APC commended the Ministry of Finance for putting the budget together to enhance national development; and called on the Government to allocate funds to the Sierra Leone Red Cross Society; adding that the paltry budgetary allocation to the Ministry of Water Resources be increased to deliver on their mandate of providing safe and clean water supply to the citizens of Sierra Leone.

Hon. Foday Mario Kamara of NGC referred to the budget as “a piece of literature” worthy of commendation. He called on Government to put more effort on agriculture and to also reduce spending on overseas travels; and to nationalize youth programmes in every region in the country devoid of partisan considerations.

Hon. Bashiru Silikie of SLPP described the budget as “a bread and butter” one; adding that the budget has the strengths to move the country forward. He commended the Government for the implementation of the free quality education programme in the country. He also thanked the Ministry of Finance for supporting sporting activities in the country; and job creation for the youths through innovative financing, as espoused in the budget.

Submitting, Acting Leader of C4C, Hon. Saa Francis Bhendu called on the Minister of Finance to provide allowances to teachers in remote communities; whilst admonishing Government to depoliticize the youth farm project; and spoke on the need of concentrating support to the military relating to engineering, roads construction and peace keeping operations. He also called on Government to allocate funds to the Sierra Leone Red Cross Society; the need to provide scholarship to disable students; provision of additional PHUs at chiefdom level; and the payment of salaries to court clerks and chairmen at the local level for service delivery since their removal from the Ministry of Local Government to the Ministry of Justice.

Speaking as Acting Leader of the Opposition, Hon. Hassan Sesay of APC described the budget as “rhetoric”; and accused the Government of resorting to do what they had earlier condemned the immediate past government for, relating to huge debts. He also urged Parliament to summon the Bank Governor to provide answers to questions regarding the deteriorating state of the Leone against the Dollar; saying that “we need robust measures to salvage the current state of the economy”.

Concluding, the Acting Leader of Government Business, Hon. Dickson Rogers of SLPP thanked the people of Sierra Leone for voting in President Bio, whom he described as “a visionary leader”.  He commended the Ministry of Finance for presenting the budget to Parliament on time. Reacting to some of the concerns raised, Hon. Rogers said that the Government is trying to fix the battered economy they had inherited from the previous government; stating that only bad contracts were terminated by Government for the benefits of the country. He also denied excessive spending by Government; citing the recent moratorium on traveling by President Bio.

He acclaimed the proposed increment of salaries for teachers; adding “it is better something is done than nothing at all” for the teachers in the country. He also said that the budget is seeking to address the issue of bread and butter in the country; and praised Government for revitalizing football in the country.