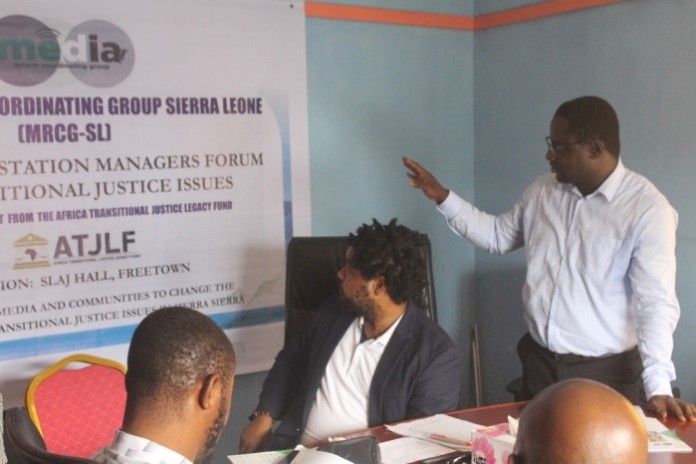 The Media Reform Coordinating Group- Sierra Leone (MRCG-SL) on the 8th December, 2022 engaged Editors and Station Managers at the SLAJ Building on Campbell Street in a meeting that was geared towards changing the narrative of transitional justice issues in Sierra Leone.

Present were the National Coordinator of MRCG-SL, Dr Francis Sowa and other members of Staff, the President of the Sierra Leone Association of Journalists, Ahmed Sahid Nasralla, the  SLAJ Vice President, Head of Independent Media Network, Ransford Wright, some members of SLAJ and a cross section of journalists drawn from both the Print and Electronic Media in Sierra Leone.

Dr. Sowa welcomed all and wished the outcome of a fruitful meeting that was scheduled to deliberates issues bordering on Transitional Justice further thanking all those present for attending and thanking them for supporting the work of the MRCG at specific points in time. He pointed out that the gathering is not a workshop or a presentation but will take the form of discussions on how to sustain the work of the MRCG around the area of reporting stories on transitional justice.

Dr Sowa also extended thanks to the mentors saying he is impressed that currently about 28 stories bordering around transitional justice have been submitted saying that is indeed impressive and impactful.

He expressed profound thanks and appreciation to, Theo Harding, for holding the fort too long in mentoring journalists on how to put together stories on transitional justice. “What you are doing now is imparting knowledge in the next generation of professional journalists which is highly commendable,” he stated adding that the specific purpose of the gathering is how to sustain or continue stories around transitional justice.

Dr Sowa said that at the end of the day the aim is to come out with good recommendations which could feed in to the next phase on how the MRCG’s enormous work on transitional justice must be sustained and made positively impactful.

He said that the knowledge that is being gained on transitional justice could be applied in other areas adding that from the look of the stories submitted it could be seen that they far surpass some stories that have won awards saying that there has been a massive progress of late in reportage.

Dr Sowa also commended, Kemo Cham, a seasoned journalist for the positive trainings he has  so far conducted in the past on transitional justice further praising him for the instrumental roles he has playing in raising awareness on some thorny issues stating how he has been doing a very fantastic job in supporting the media to develop in the country.

On his part, the President of SLAJ, Ahmed Sahid Nasralla said that youth unemployment is the order of the day coupled with a lot of other societal ills which if not serious addressed will have negative repercussions in certain communities.

He pointed out the importance of journalists pointing out the frailties in societal living, what should be the rights individuals must exercise and how those rights could be safely guarded from abuse and infringements.

It was Ransford Wright, Head of the Independent Media Network in the country, who raised the alarm of what should fill the void when the project’s life phases out reaches asking whether that would mark the end of reportage on stories of Transitional Justice.

After fruitful discussions it was finally recommended that the submission of stories on transitional justice should be filtered in to or made part of the Editorial Policies of media outlets, that  in the next SLAJ Awards Ceremony a category on Transitional Justice Stories must be catered for as a way to motivate individuals to do more stories in the area. Another brilliant recommendation is to get some of the mentors extend their mentoring to benefit journalists in the provinces on the related area under discussion. Also, that the TRC Report should the reference point for stories related to transitional justice, that the stipends must be maintained to provide motivation but is not an alternative to monthly emoluments and  that in situations where Editors are not too au fait with transitional justice stories then they should be trained to know the contents that must be present.