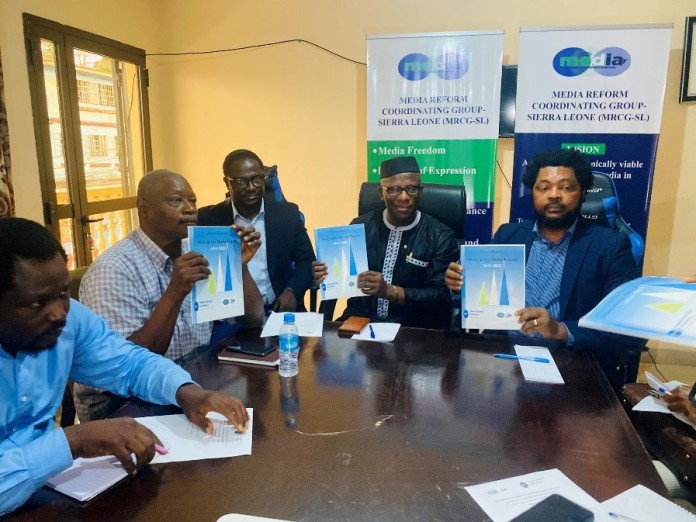 The Media Reform Coordinating Group (MRCG) has on Monday 5th December, 2022 officially unveiled the State of the Media Report 2018-2021. The report that is led by the Faculty of Communication, Media and Information Studies, University of Sierra Leone with support from the National Endowment for Democracy (NED) was launched at MRCG’s Office on Circular Road in Freetown.

In his address, the National Coordinator of Media Reform Coordinating Group (MRCG), Dr. Francis Sowa said that the Report presents a critical overview of the prospects and challenges in media freedom and development in Sierra Leone, with a special focus on the 2018-2021 period, as well as the role of the media in the country’s sustainable development pathways.

He pointed out that is it is broadly divided into two parts: the first presents an overview of the media landscape during the period under review focusing on freedom, professionalism, performance, state- media relations, regulations, management, ethics, etc.; while the second presents academic articles on the role of the media and access to information in sustainable development.

“As this Report shows, Sierra Leone has in the past four years made progress in the entire gamut of press freedom and freedom of expression ecosystem; thanks largely to the historic repeal of Part V of the Public Order Act, 1965, which contained the offences of Criminal and Seditious Libel. But the report notes that there are still some challenges relating to the safety and security of journalists and investment in the media landscape as media poverty continues to affect the industry,” he revealed.

He concluded by informing pressmen that the Report is a continuation of the last edition published in 2018 which largely contained issues and events in 2017.

On his part, the Chairman of the Independent Media Commission, Victor Massaquoi, PhD, described the report as a critical piece of research designed to test many questions bordering on human rights, freedom of expression, policy environment and the media landscape in the country.

He said that the report is rich in information, knowledge and content. He informed all that by several measures the state of the media in the country has drastically improved between 2018-2021.

“Over the years we have registered many newspapers and radio stations and we will continue to register media houses across the country. Despite the challenges, which include, a reduction in the revenue of the media, cutbacks in terms of newsroom staffs, improvement in terms of policy but at the same time the media continues to strive in the country,” he maintained.

He added that the State of the Media Report 2018-2021 has closed a lot of critical gaps in the media literature of the country.

Launching the report, the President of the Sierra Leone Association of Journalists, Ahmed Sahid Nasralla commended the Reform Coordinating Group (MRCG) for putting together and launching of the State of the Media Report 2018-2021.

The President concluded by officially launching the State of the Media Report 2018-2021.