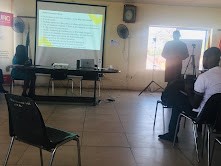 The Sierra Leone Urban Research Centre, in collaboration with the Freetown City Council and with support from ACRC, on the 6th December 2022 held a City Learning Platform Meeting on the theme, “Translating Research into Impact”.

The meeting, which was held at the YMCA Conference Hall, situated on Fort Street in Freetown was geared towards exploring ways to translate research findings into impact on the example of the African Cities Research Consortium Project.

He furthered that they sought to facilitate and coordinate knowledge sharing, bringing together all sets of stakeholders that are involved in addressing critical urban issues and challenges.

The Executive Director stated that, according to research they did in 2016, the residents of Freetown, the capital city of Sierra Leone, experience serious disparities in relation to their access to basic housing, infrastructure, and services. He maintained that currently Freetown’s informal economy is estimated to provide jobs for as much as 70 percent of Freetown’s population.

He affirmed that taking forward concrete actions to improve the social, physical, and environmental conditions of the lives of informal settlement residents, should be at the center of Freetown’s concerns.

“The last decade has witnessed more and more efforts to work collectively to resist evictions and improve the conditions of informal settlements, with the emergence and consolidation of community-based organizations such as the Federation of the Urban and Rural Poor (FEDURP), and the creation of community structures around saving groups,” he disclosed.

“The City Learning Platform (CiLP) is a space for learning and sharing, in which different actors can gather to discuss experiences, current urban issues and identify solutions, coordinate, and develop proposals for the upgrading of informal settlements in the city of Freetown,” the Executive Director stated.

He maintained that the City Learning Platform will provide a model of engagement that targets three major elements; firstly, creating a democratic platform for policy dialogue, debate, and discussions.

He furthered that, secondly, creating a feedback chain from the community to the city level, and vice versa, allowing scaling-up of practices from particular communities to more informal settlements within the city, and institutionalizing and disseminating participatory planning methodologies that foster pathways to urban equality.

The Director of Research and Training, Braima Koroma, stated that, the City Learning Platform contributes to the informal sector (employment) of the city’s economy, and according to him, provides labour for household chores to residents in the city.

He noted that, even those deemed to be the most influential in the settlement- the chief and elected councilor struggle to have any voice at the city or national level in terms of ensuring that basic goods or services are delivered for residents of the settlement. According to him, their influence is very much limited to the settlement itself.

“Given prevailing political dynamics in the settlement- where one party dominates- there is no significant need for even political actors to even deliver basic services as part of a vote-winning election promise and as a result residents don’t stand to benefit informally or formally from political office holders. NGOs are the service providers to the settlement,” Braima Koroma stated.

He stated that Community organizations are small in terms of numbers of members and not well coordinated. According to him, that dynamic could be changed with the recent creation of the Local Chairman position, and how for now, there is a lack of a strong collective voice to put pressure on reforms.

The meeting was climaxed with a question and answer session, followed by a group work and group presentations.