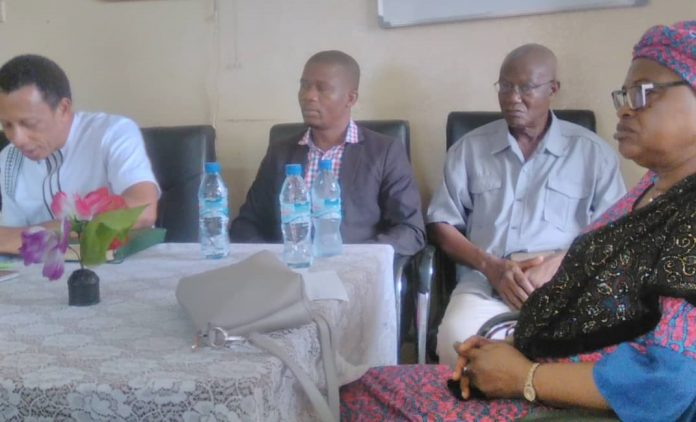 The National Grand Coalition (NGC) has said that the country is undergoing an economic emergency. This disclosure was made on the 6th November 2019 during a press conference held at the party’s headquarter on Naimbana Street in Freetown.

Dr. Dennis Bright, Chairman of the National Grand Coalition party disclosed that since the conclusion of the elections the NGC has been pursuing its unique style of constructive opposition adding that they have been supporting those policies of government that they consider to be in the best interest of the country and opposing the negative policies and actions that may adversely affect the people of this country.

He noted that they will continue to do so as it is in line with their guiding principle of putting “Country First” in whatever they say or do. He said that as an opposition party they are committed to defending the interests of millions of voiceless people who continue to suffer in poverty.

Dr. Bright noted that according to the Sierra Leone Constitution political parties are established “to participate in shaping the political will of the people, to disseminate information on political ideas, social and economic programmes of a national character.”

He added that in keeping with that the NGC party will therefore engage the Press every month on critical issues and problems affecting the daily lives of the common man.

“Three out of every five Sierra Leoneans today are living below the poverty line and this is the result of many years of decline, mainly due to mismanagement, corruption and bad governance. What we the political leaders need to understand is that the great call for change that we heard from the people in the 2018 election was not merely for a change of Government but for a change from the hardship they have endured for so long,” he underscored.

He said things are getting worse and at a rate that is becoming frightening, adding that there is a school of thought that holds the view that all that is happening today is not new and that with time things will work out as they have always done in the past.

The Chairman also disclosed that currently there is a wave of civil uprising, violent protests and demonstrations against Governments and political establishments that is spreading from one continent to another citing Hong Kong, Bolivia, Chile, Peru, Haiti, Egypt, Sudan and Guinea. He highlighted that people are exposed to external forces to such a point where they could be influenced by these global trends through the impact of the internet and social media.

“It is difficult to tell but we believe that it is better to fix the problem than waiting to find out,” he stated.

He revealed that during these briefings the upcoming media engagements they will be inviting Government officials and other opposition parties ,to  tell them to put politics aside and collectively consider how rapidly things have deteriorated.

“We at the NGC consider that at this moment our country is facing a state of economic emergency and that no other priority is more urgent now than reducing the burden of hardship on the common man,” he posited.

According to him to understand the cries of the people, the NGC has been studying the rise in the prices of food related items since 2018 and this is what they found out in March 2018:

In its Press Release issued out NGC stated: “There is a déjà-vu school of thought that believes that all that is happening today is not new and that with time things will work out as they have always done in the past. Perhaps they always do until they don’t. Currently there is a wave of civil uprising, violent protests and demonstrations against Governments and political establishments that is spreading from continent to continent: Hong Kong, Bolivia, Chile, Peru, Haiti, Egypt, Sudan and Guinea. Is the misery of our people as well as their exposure to external forces at a point where they can be influenced by this global trend through the impact of the internet and social media.

They raised concern on increases in prices of basic commodities as such:

The chairman said  prices change from market to market, within a region and across regions and the prices quoted above are merely averages. “You will realize that the most substantial increases are on the prices of very basic foodstuff: for instance, the price of a bag of rice has risen by 32% but for those who can only afford to buy by the cup the increase is 108%!!! In the case of garri which is usually the last resort for those who cannot afford rice, the increase in price is in fact 200%!!

So when the price of herring has increased by 433%, palm oil by 50%, onions (one piece) by 300%, plassas by 233%, kanda by 157%, maggi by 100% , cookery rice by 67% and lafidi by 100% we believe that the time for long explanations and debates on who caused it is over and the focus of the Government should now be to find some emergency solutions to alleviate the suffering of our men, women and children.

We have estimated that a family intending to cook a basic meal for four persons (with 4 cups of rice, herring, palm oil, leaves, maggi, onions and water using charcoal) would need not less than Le 42,000 per day which works out at about Le 1,260,000 per month; considering that the minimum monthly wage is still Le 500,000, this means that the family can eat for only 12 days. The family will need an extra Le 730,000 to eat rice for the remaining 18/19 days. This is just for food and does not include other necessary expenditure on transport, pure drinking water, rent, clothing, medicals etc. One can only imagine what our young jobless youth are going through at this time.”

He highlighted that It will be of great benefit to all of us if the energy, attention and resources that are currently being wasted on fighting over bye elections in wards and constituencies are directed at finding ways to alleviate the hardship of our people. According to him the Government of Sierra Leone is a legitimate one voted for by the citizens of this country; therefore it has an obligation to listen more to the people than to itself, the Press Statement pointed out.

The NGC said Government of Sierra Leone can of course point to several initiatives it has taken to address corruption, block leakages and deal with the inadequacies in social service delivery including in the education sector. But in spite of all these efforts, the ordinary man continues to sink into greater hardship finding it difficult to survive. We at the NGC believe that the main priority for Government today should be to focus on the economy and how to reduce hardship among the people.

In its: release the party stated “As a first step it is very important that the Government brings together key economic stakeholders to examine the situation holistically, taking into account the variety of concerns and interests and finding ways in which their suggestions can contribute to re-injecting life into the economy and offer at least temporary relief for the people.

It must be recalled that less than three months into the life of this Government there was an excellent initiative undertaken by the Ministry of Trade and Industry and the Ministry of Finance in convening importers, exporters, retailers, bankers, insurance companies, SMEs etc. for a round table brainstorming on the economy. But as with many other great initiatives that this Government has brought up, there has been no follow up or continuity. The officer who recorded notes during the meeting has since been sacked and has apparently left with the memory of that meeting.

As a matter of extreme urgency Government should convene these players who make the economy work to find practical solutions to the current economic difficulties our country is facing. However qualified or technocratic our politicians may be they do not have monopoly of knowledge about the intricacies of the economy and how to solve the problems. Government has an opportunity to use the hands-on knowledge and experience of our traders and business operators, importers, bankers, contractors, retailers, insurers etc. to bring about a consensus on the way out of the current situation of hardship in Sierra Leone.”