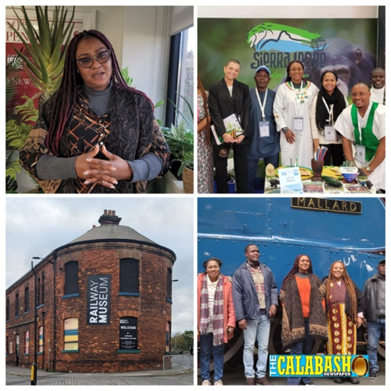 The Sierra Leone National Tourist Board (NTB) actively participated in the 2022 World Trade Market from the 7th to 9th November, 2022 in London.

General Manager of the Sierra Leone National Tourist Board, Fatmata Mida Carew led the delegation that  represented the country at the annual event.

It must be noted that the World Trade Market in London is the market leading international travel event, unlocking business opportunities for inbound and outbound tourism professionals.

Furthermore, the B2B event allows tourism businesses from around the globe to showcase their brand and exhibit at the show along with the biggest names in the accommodation , hospitality and renowned tourism destinations and attractions, innovative travel technology providers and airlines.

The event helps the NTO and international travel providers to do business with world class travel buyers as well as to showcase their services to the international Press.

During the event, the General Manager of the Sierra Leone National Tourist Board, Fatmata Mida Carew, portrayed Sierra Leone as a peaceful tourist destination to WTM visitors referencing the Global Peace Index (IGP) 2022.

“We have done four peaceful elections and we will soon get the 5th in 2023 as a nation, free of wars and social imbalances,” she stated with pride.

In a session, the NTB General Manager, without prejudices, stated:  “The 2022 GPI highlights Sierra Leone in the second colour category (light Green)  clearly indicating that Sierra Leone is among the most peaceful countries in the world.

She informed that stating that on the 2022 GPI list of 163 countries, Sierra Leone was ranked and  placed  50th position with a score of 1.801, indicating clear  upward mobility progress of 2-step from the 2021 GPI.

It must be noted that positions and status were shared with great industrialized and advanced nations like; Australia, Germany, the Netherlands, the United Kingdom (UK), as the list goes on.

The NTB General Manager reiterated that Peace through tourism refers to a number of data analysis which suggests tourism may contribute to cross-cultural understanding, tolerance and even peace between communities, cities, nations around and Sierra Leone is now taking the bold steps using Tourism for Peace in major destination campaigns.

Her submission to the tourism representatives for Germany, UK, Canada, America and other international tourism stakeholders cleared doubts and ill feelings about Sierra Leone as a touristic destination.

In her conclusion she listed the different tourism projects undertaken so far in a continuous effort to raise the tourism profile and destination image.

She also commended that the Ministry of Tourism and Cultural Affairs, through the leadership of Dr. Memunatu B. Pratt and the Tourism Directorate, have done massive community engagements and youths empowerment, capacity building and training, as  public/private sector partnerships  are key fundamental factors in advancing a culture of peace through tourism in a post-conflict society as Sierra Leone.

In her welcome note, she appreciated the team for endeavoring to honor their invitation to see the monumental Relics of their Railway Museum.

The Iconic National Railway Museum is a museum in York settlement which forms segment of the Science Museum Group.

The official visit helped the delegation to understand the essence of  the museum which tells the story of rail transport in Britain and its impact on society. That historical museum is a domicile for preserving national collection of historically significance, which includes: railway vehicles such as Mallard, Stirling Single, Duchess of Hamilton and a Japanese bullet train.

In addition, the team discovered that the National Railway Museum anchors a diverse collection of other objects and articles that has elementary pieces of the historical touch of fine arts.

Madam Ashby, in the escorted tours, made the team to understand, that the great museum has won many accolades and awards, including the European Museum of the Year Award in 2001.

Annmarie Kamara, the Administrative Manager from Monuments and Relics Commission in comparing the National Railway Museum

Freetown, Sierra Leone said after Sierra Leone’s railways shut down in 1974, the same collection of engines and other artifacts spent decades hidden away in this old workshop—now a museum.

“However, we are here to see how these structures been done here could be replicated in the future,” she intimated.

The General Manager National Tourist Board, Mrs. Fatmata Mida  Carew in addition, emphasize the need for healthy collaboration between the York Museum and Sierra Leone Railway Museum stating that she believes heritage and culture will have a place value of sustainability.

Chairman of the National Tourist Board,  Tamba Alliue Kokobaye called on Madam Hellen Ashby to foster the collaboration between York Railway Museum and Sierra Leone National Railway Museum to be Coordinated and directed by the Monuments and Relics Commission.

The visit to York National Railway Museum and York city itself was an eye opener to the team as viewing their key Monuments and Relics gave a clear insight to the team on maintaining heritage and cultural elements.