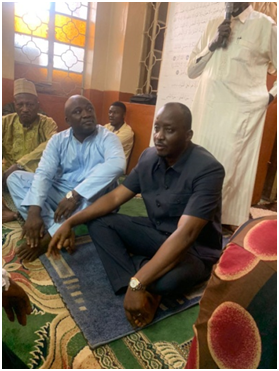 Lined at the entrance of the Mosque the leadership first heartily welcomed Gento for deciding to worship with them wishing him a fruitful stay as well.

After prayers, Mohamed Gento Kamara, addressed the congregation that as part of their decision to pray with them he wants to respectfully disclose his intention to contest for the Mayoral Seat in the Freetown City Council under the ticket of the Sierra Leone People’s Party (SLPP). “This is the information that I decided to bring to you in order to solicit your endorsement so that in June 2023 come the General Elections you will give me your unflinching support,” he stated.

Nfa Amara Kallon, the Chief Campaign Strategist for Gento informed the Jammah that it is high time for residents of Freetown to come together, support a young man to make a meaningful transformation of one of the oldest cities in the West African Sub-region. He told the congregation that he is determined to change the face of the city, make it attractive, peaceful and united.

“He is a man who does not believe in tribalism and one of his topmost priorities is to unify all the tribes in the metropolis and to even demonstrate that his first move was to bring together all the Tribal Heads in Freetown and appealed to them not to use tribalism to advance political sentiments,” he revealed.

Nfa added that Gento is a very hardworking man, the brain behind the reconstruction of the Hill Cut Road, the promoter of football who has been very supportive to various football clubs in the country and a philanthropist who has assisted a lot of people and continues to do so.

In response, the Chief Imam and other authorities of the Mosque thanked Gento and his group for coming. They said even before this time

They have heard a lot of good things about him maintaining that they are looking forward to such individuals who have the development of the country at heart. “As long as any individual is ready to bring development we will solidly rally behind that person because if development comes it will benefit all of us and not just the few,” they said.

The highpoint of the event was the offering of special prayers for Mohamed Gento Kamara.