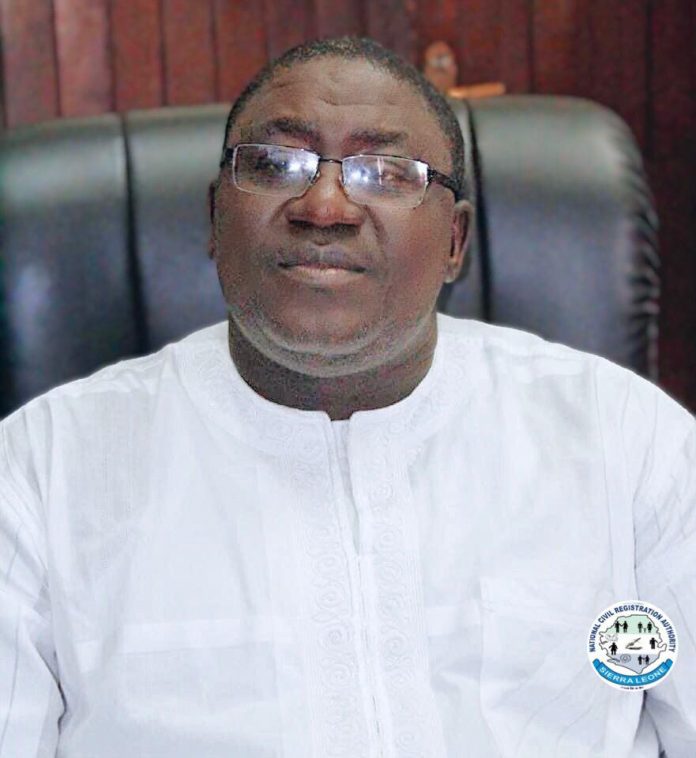 On Thursday 28 May 2020 during the State Opening of the Third Session of the Fifth Parliament of the Second Republic of Sierra Leone in the Chamber of Parliament His Excellency President Julius Maada Bio commended the many strides made by the NCRA under the Management of the Director General of NCRA, Mohamed Mubashir Massaquoi.

The President also called on citizens and non- citizens resident in Sierra Leone to cooperate with the National Civil Registration Authority (NCRA) in the development and maintenance of a Permanent Civil Register which is a critical tool for development. He recalled with satisfaction the case he made at the 74th Session of the UN General Assembly held in September, 2019 to forge partnership and use innovation for ‘… a serially numbered identification instrument that can be used for governance, development planning, financial inclusion and also human rights imperatives”, a case the President notes is on track as desired.

The recognition of the pivotal role played by the NCRA in the country’s development trajectory by President Bio can no doubt be attributed to the astute leadership and efforts of the DG Massaquoi and his team of professionals at the NCRA. The DG, a man with enormous talent, training and experience has been directing the affairs of the Authority since his appointment in 2018 by President Bio.

He has transformed a once moribund institution that was once derisively known as ID Card office reserved then for retired Civil Servants to an efficient power house for data reliably sourced from Civil Registration and Identity Management System and is now on the dashboard of global institutions keen on the use of credible and real time data for development purposes and accountable service delivery as well as good governance in the country.

In his address at the Chamber of Parliament, President Bio informed the House of Parliament and the general public about the commencement of the nationwide Confirmation of Personal Details of all Registrants and Registration of the unregistered population by the NCRA and therefore, strongly urged every citizen and non-citizens resident in Sierra Leone to cooperate with the National Civil Registration Authority as he put it

“My Government has commenced the nationwide exercise of confirming Personal Details of citizens, resident non-citizens, and the unregistered population of Sierra Leone. The development and maintenance of a Permanent Civil Register will serve as foundation and primary source of information on the population of Sierra Leone.  On this note, I will strongly urge every Sierra Leonean Citizen and non-citizens to cooperate with the National Civil Registration Authority,” the President announced.

Like many well-meaning leaders, President Bio and the New Direction Government are cognizant of the invaluable role that Civil Registration and Identity Management plays in the development of the country. He therefore calls for the development and maintenance of a Permanent Civil Register which will “… serve as foundation and primary source of information on the population of Sierra Leone.” It is a job that the DG and his staff relish with passion.

With this clarion call by President Bio, the Director General of NCRA, Mr. Mohamed Mubashir MASSAQUOI  wants to assure the President,  the Government as a whole and the people of Sierra Leone that the NCRA will continue to render quality service delivery to all its clients and serve the nation diligently, professionally and transparently at all times.

When asked how he felt about the President’s commendation,  the DG opined that he feels inspired and motivated to do more and encouraged his staff to remain dedicated to  serve  our people. He maintained that he feels obliged to remain focused and provide the required leadership for a committed team at the NCRA to achieve remarkable accolades which are an indication of a job well done. He thanked the President for recognizing the work of the NCRA in the development aspirations of the unbeatable New Direction Government the NCRA DG added