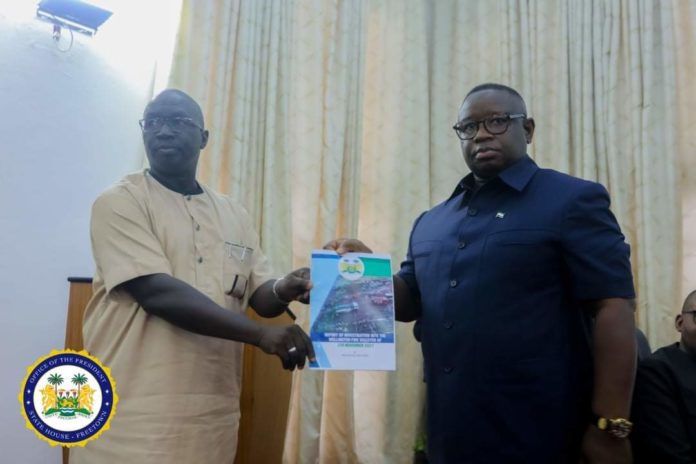 The Director General of the National Disaster Management Agency, (NDMA) Lt. Gen. (Rtd.) Brima Sesay on the 28th April 2022 presented a report to President Julius Maada Bio from the 15-man Presidential Taskforce set up to investigate circumstances surrounding the cause and extent of destruction after the Wellington petrol tanker fire disaster of 5 November 2021 that claimed over 150 lives.

Chair of the committee and Director General of the National Disaster Management Agency, NDMA, Lt. Gen. (Rtd.) Brima Sesay said they were presenting the findings with general and specific recommendations for all institutions that constitute the Sierra Leone Incident Management System (SLIMS).

“First, we found out that the behaviour of the public, following the collision, was a major contributing factor to the scale of the incident and a serious cause for concern. At the outset…despite the tanker driver using a megaphone borrowed from a nearby seller to advise the public to avoid the scene, he was reportedly insulted and his advice completely ignored,” he said.

He noted that they also proved that the fire disaster occurred following the collision between the fuel tanker and the tipper truck over half an hour before the explosion.

Lt. Gen. (Rtd.) Sesay added that there was poor communication between security services and the Petroleum Regulatory Agency, responsible for regulating oil marketing companies, and emphasized the need to enhance effective communication among all players in the SLIMS.

“Your Excellency, it is fervently hoped that one critical turnaround point in the entire emergency management establishment in the country is the provision of knowledge to the public on dangers associated with industrial products in BRVs or fuel tankers that ply the carriage-way in the country,” he said.

In his response, President Bio described the incident as a national disaster the magnitude of which they had never seen in recent times, adding that he had to cut short his trip abroad to return home to provide leadership, give hope and console the bereaved.

“We were overwhelmed but, in the circumstances, you led the response. I want to use this opportunity to thank you the NDMA and all other agencies that were first responders. It includes the military, the fire force, the medical team and all forces that came to help on that day.

“I was particularly pleased with the health professionals who did their best and took care of our compatriots, the victims. This is a clearer indication that we must all work together, especially at difficult times,” he said.

He assured that his Government is going to take a closer look at the findings and recommendations and definitely look at what policy and measures they could take henceforth to prevent any such possibilities.

To Sympathize with Affected Families of the Wellington Fire Disaster…. SL Brewery Donates 1,000 Crates of Maltina Can & 100 Bags of Rice...