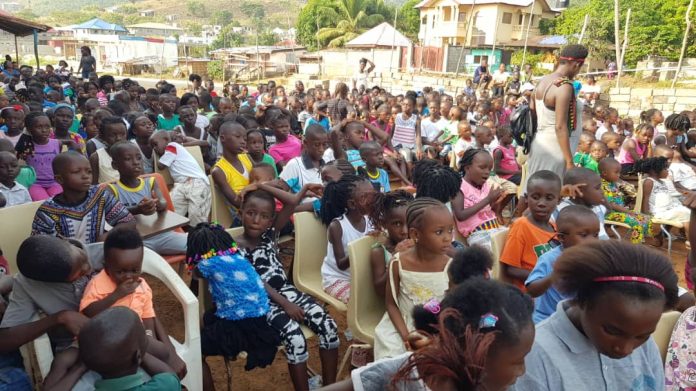 A humanitarian organization, Never Give Up Foundation, which was established in 2016, has been working tirelessly to ensure the standards of children are elevated.
Just after it was established, the Foundation undertook different activities aimed at giving succour to children.
The founder of Never Give Up Foundation, Lance Mavin Marah explained that the main aim of the Foundation is to assist orphan kids and children with disabilities.
Lance Mavin Marah said his main intention is to ensure that he provides shelter, food, medications and scholarships for those children.
He said Baw Baw area is the place he is planning to construct a home for them.
He disclosed that he has been engaging the children in school feeding programme in July and intends to continue with it.
In 2018, Never Give Up Foundation was engaged in community feeding programme .
The same year, the Foundation took 30 kids to watch the Black Panther movie at the Lagoonda Cinema, West of Freetown.
The motive and idea behind that ,according to the Founder that is based in Germany, was to help those kids take their minds off the tension and words going around in town during the elections.

Black Panther Movie, he went on, was the best movie they can watch at this time because the film has Black Predominant casts and is focused on how rich the African continent is and how Africa would have looked if not for colonialism and the importance for Africans to work and stay together.

All the kids were so positive and grasp the concept of the movie and knew how important the family and nation are to them.

Lance Mavin Marah said for them that was very good for the kids to remember and learn how important it is to have education and help their nation. “We are planning in doing more for these kids in order for them to build our future because these kids are the future leaders,” he maintained.