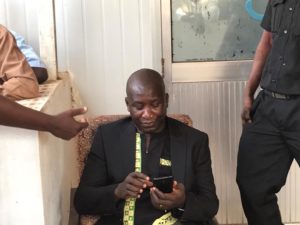 The Executive Chairman of Produce Monitoring Board, Dr. James Vibbi has disclosed that the institution in three months from October to December 2018 generated the sum of Three Billion, Two Hundred and Thirty-One Million, Four Hundred and Nineteen Thousand, Six Hundred and Fifty-Five Leones (Le 3,231,419,655), saying that this revenue has been paid directly into the Single Treasury Account at the Bank of Sierra Leone.
He made this disclosure on the 31 January 2019 at his Lightfoot Boston Street Head office in Freetown.
He said the institution has the mandate to regulate, promote and improve the making in order optimize the export earning of farmers, encourage the production of quality produce to meet international standards.
He said since he took up office as the Executive Chairman of the Board, a lot of reforms have been done including restructuring the Quality Control, Marketing and Finance departments to make them more effective and efficient.
He informed that PMB has also streamlined its operations to improve on its organizational effectiveness to be able to deliver on its mandate.
He made it cleared that over the years the institution has been generating Le 4 Billion on average per year.
‘As provided for in Part V, Section 11 of the PMB Act of 2013, PMB charges a levy of 2.5% of the FOB value of the unit of measurement of any produce to be exported from Sierra Leone’ he noted.
He furthered stated that PMB’s presence has also been increased in some border-crossing points across the country to help forestall the smuggling of produce.
He underscored that these initial reforms have led to an unprecedented increase in revenue generated by PMB, and they are determined to increase this more by deploying additional staff at the border-crossing points to collect the statutory 2.5% levy on produce moving across our borders.
Dr. Vibbi emphasized that over the years the institution has been losing huge sums of money through under-valuation of export levies for produce and smuggling of produce at the border areas, and these are some of the key issues PMB has taken head-on, and they are determined to sustain this drive in order to generate more revenue to help the Government to deliver on its mandate.
In addition, he said the institution has in January 2019 generated a total of Eight Hundred and Ninety-Nine Million, Three Hundred and Sixty-One Thousand, Five Hundred and Ninety-Two Leones and Thirty-Three Cents (Le 899,361,592.33), adding that this is an evident that PMB will increase its revenue as time progresses.
He pointed out that January has been described an ‘off season’ for produce with Three Hundred Million Leones (Le 300,000,000) as highest revenue generated, but January 2019 has defied this norm given the reforms that have been implemented.
He said PMB will continue to engage famers across the country to improve on the quality of produces.
He assured that PMB will raise more revenue for government to facilitate it functions.