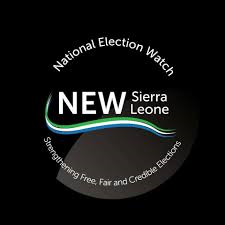 One organization, the National Elections Watch (NEW) on the 10 March 2019 issued out a Press Release in which the elections watchdog demanded explanation from the National Electoral Commission (NEC) for election irregularities observed at the Tonko Limba Chiefdom, Ward 196 Re-run Bye-election
It was further stated that the National Election Watch (NEW) observed the re-run bye-election held in Ward 196 in the Tonko Limba Chiefdom, Kambia District, on Saturday 9th March 2019 furthering that though the election was free from violence, however it noted with concern some serious irregularities during the process. It added that those irregularities undermined the integrity of the entire election.
The institution’s key observations and questions asked include :

• Polling stations were opened on time in all locations;
The Memorandum of Understanding (MoU) signed by all political parties to ensure that only one high profiled political party official is allowed within the polling precincts was respected;

There were complaints against Polling Center Manager (PCM) in center no. 08057, St. Mary’s Junior Secondary School, Mile 14 in the presence of senior National Electoral Commission (NEC) officials, PPRC representatives and the media. The PCM was accused of being an active SLPP operative within the Kambia District. The PCM was asked by senior NEC officials to sit aside;
NEC officials issued both 2018 and 2019 ballot papers for the same election;

In polling center 08056, station 3, Kagbonkoh, a voter identified as Momoh Samura was caught with 6 pre-marked and stamped ballot papers inside the polling station and was handed over to the police. All ballots were marked in favour of the Sierra Leone Peoples Party (SLPP);
Banker: Sierra Leone Commercial Bank (SLCB)

• Another man was caught with pre-marked ballots in Mile 14 within the polling precincts. When interrogated by the police in NEW’s presence, he admitted that he was given a pre-marked ballot and Le 20,000 on the eve of the election to illicitly cast it on polling day;

NEW, therefore, demands that NEC as the body tasked with the responsibility to conduct and manage all public elections in Sierra Leone, explains to the general public the circumstances that led to the following:

• Why sensitive ballot papers were in the possession of some voters prior to the election?

• The use of 2018 and 2019 different ballots papers for the purpose of the same election.
• Why did NEC officials fail to reconcile the ballots issued at the polling station before counting and to also clear this very issue during the tallying process?

• Why were the RRFs rejected by the computer at the tally center?

• How did NEC arrive at the results when the tallying process was not concluded in front of observes and party agents and how was the issue of over voting addressed?

The National Elections Watch commended the SLP and the Office of National Security (ONS) for their professional handling of the security aspect of the election and for their efficient enforcement of the MoU that the political parties signed with elections stakeholders.

The institution stated that the trend of election irregularities is a reverse in our democratic gains and called on all stakeholders to denounce such irregularities and work towards ensuring that the integrity of the electoral processes are guaranteed.

National Election Watch (NEW) is a coalition of local and international organizations in Sierra Leone with a common objective of supporting free, fair and peaceful elections. NEW will continue to observe all elections and will report its findings accordingly.