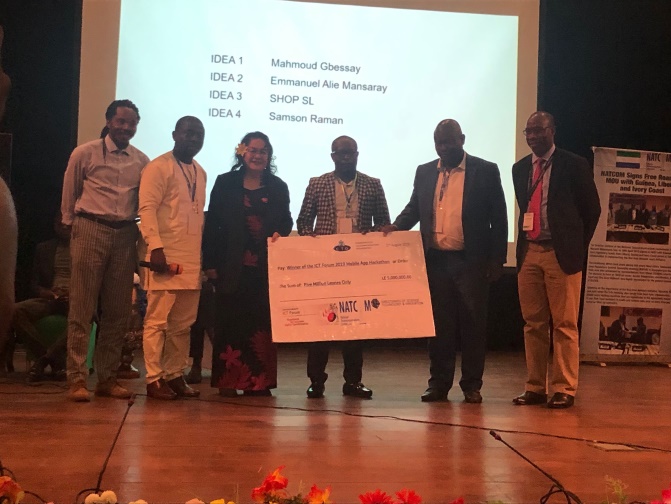 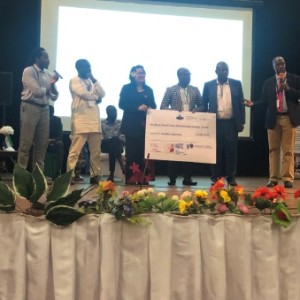 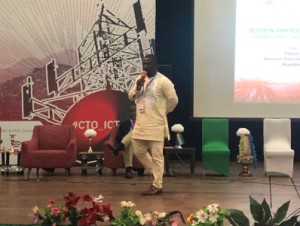 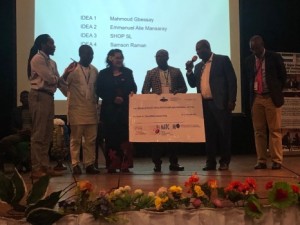 Njala University is now in top gear as one of its students recently defeated three participants from other Universities that took part in the pitching of innovative ideas based on Information, Communication and Technology (ICT).

The event took place on August 2, 2019, the final day, of the   Commonwealth ICT conference which took place at the Bintumani Hotel from the 31st July to 2nd August 2019.

The well attended conference was hosted by the National Telecommunications Commission (NATCOM) with the Theme:  “Broadband for Inclusive Digital Transformation”.

Rural connectivity, Analogue to Digital, Broadcasting transformation, Enhancing local innovation, Emerging technologies, Big data, Youth and ICTs, Data protection, Broadband infrastructure sharing and OTTs were all thematic areas that were widely deliberated by all the participants comprising representatives from within  and without the country.

Giving a background of the competition Dr. David Moinina Sengeh, the Chief Innovator of DSTI said, “The Directorate of Science, Technology, & Innovation in partnership with the National Telecommunications Commission (NATCOM), and the Commonwealth Telecommunications Organisation (CTO) invited the general public to submit ideas to its connectivity challenge during its annual Commonwealth ICT Forum.” He furthered that the response was somehow a bit encouraging but expressed disappointment for not having a female participant.

He disclosed how the Connectivity Innovation Idea /Challenge is about making a positive impact by providing or making use of increased quality connectivity in Sierra Leone. Dr. Sengeh pointed out that for someone who is participating in the challenge an individual stands a chance of winning Le 5,000,000 to make his or her idea become a reality, adding that those with good winning ideas will also be given an opportunity to develop a prototype in partnership with DSTI.

The young Dr. Moinina Sengeh said the panel of judges were able to select 4 finalists who were invited to pitch their ideas live on stage at the end of the Commonwealth ICT Forum 2019.

It was a highly competitive and tense moment when the Chairman of the event, Mr. Daniel Kaitibi, who doubles as Deputy Director General of NATCOM, allocated 3 minutes each to the finalists to pitch their ideas.

Dilating on his idea, he highlighted how the SLPP Maada Bio led Government places premium on enhancing quality education and such is evident in introducing the flagship free quality education that is now benefitting pupils from nursery school up to senior secondary school level. He also mentioned how the idea of encouraging female students pursuing courses in the sciences at the university is a laudable one.

Mahmoud argued that through making use of educational television programs, which he designed, such could greatly help in terms of enhancing and taking education to another level. He underscored that education is the engine for development stressing that efforts need to be made by State and Non-State actors to ensure that everything is humanely done to make education worthwhile. “True individual and national development can highly become possible through educational empowerment,” Mahmoud told the attentive audience, emphasizing how educational television could broaden connectivity and go widely.

He successfully thrilled the judges as well as the audience by the way he marketed his idea and ultimately emerged as the winner.

Dishing out the award to the deserving winner, the Director General of NATCOM, Maxwell Massaquoi, thanked all the participants for showing interest and taking part in the competition. “To develop a proposal within a short-given period of time is really not easy but you guys have proven that with commitment and dedication the impossible can become the possible,” he posited followed by a warm round of applause from the audience.

The other three participants were given consolation prizes of two million Leones each and offered the opportunity to undergo further training to improve on their existing knowledge.