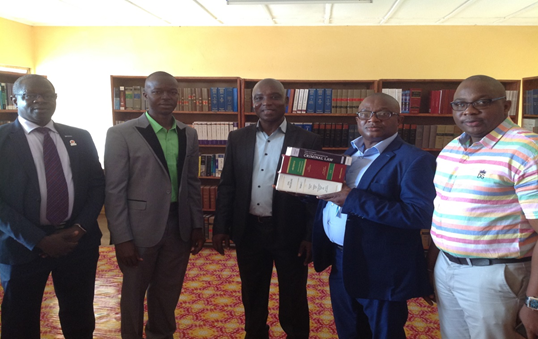 A donation of a large consignment of law books was done by a UK- based company, Anglo American Company, De Beers and GemFair in partnership with the International Law Book Facility (ILBF), a UK-based charity with the mission to support the rule of law and access to justice through sharing of legal knowledge. The UK Sierra Leone Pro Bono Network was also part of the donation exercise.

A case for the donation of 213 cartoons of law books in order to boost and to harness the potentials of the Njala University Law Department was made by Emmanuel Saffa Abdulai, one of Sierra Leone’s erudite legal practitioners and formerly served though transiently as the Chairman for the Sierra Leone Premier League Board.

Chief Executive Officer, ILBL, Katrina Crossley  who was unavoidably absent yet represented by  Raymond Alpha remarked thus ‘’the ILBF is delighted to donate books from the UK legal community to Njala University. We very much hope that this donation will support the lecturers, students, and practitioners in their important work…’’

Accordingly, a team of Anglo-American lawyers based in London namely Jonathan Hoch, Cecilia Ferreira and Andrew Donovan were successful in their pursuit to support the ILBF represented by their CEO Katrina Crossley to distribute legal textbooks to Sierra Leone under a project known as the Rule of Law Ambassadors with supports provided by Clifford Chance (an international law firm) and Nottingham University to make the delivery possible.

Acting Dean, School of Social Sciences, and Law, Dr. James Fomba Sandy, on behalf of the University Administration expressed gratitude to the donors and all role players for uplifting the academic profile and pedigree of the Njala University Law Department which was established three years ago.

With a current students’ enrolment of 130, the University he went on has been able to employ high profile Judges of the Superior Courts of Judicature and Lawyers 90% of them, he added are holders of Masters of Law (LLM)

With current staff strength of 14 hardworking and committed men and women who are presently lecturing various courses on the programme, and with an entry requirement detailing WASSCE Certificate and a First Degree from any recognized University and with course duration of three years, they have succeeded in admitting three batches. Plans he disclosed are underway to sail the first batch of students admitted ab initio to Final Year after meeting the required grade points for promotion.