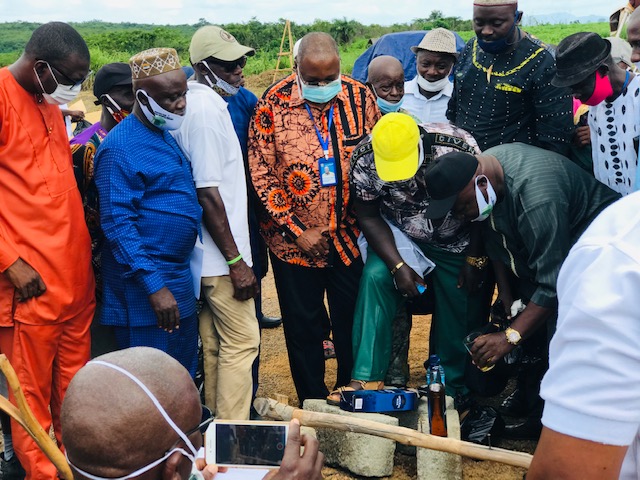 As part of their support to complement the efforts of Government towards human capital development in the country, Njala University in partnership with Sierra Leone’s Embassy in Seoul, South Korea and the Medical Peace Foundation on Friday 16th October, 2020 commissioned the construction of the Madam Yoko Memorial Trauma Centre and Medical Centre.

Speaking during the launch, Acting Vice Chancellor and Principal Osman Sankoh alias Mallam O extended gratitude to the Ambassador to South Korea, H.E. Kathos Jibao Mattai, whom he said is an alumnus of Njala University, for his support towards the project, adding that the Korean Medical Peace Foundation is the lead founder of the project.

Giving a brief background of Njala University’s involvement in the project, he said in November 2019 the then Pro-Chancellor of Njala University, Professor Herbert Borboh Kandeh introduced Ambassador Mattai to the University in connection with the establishment of a Trauma Centre along the Bo-Taiama Highway and that subsequently an MOU was signed between Ambassador Mattai in Seoul and the Chairman of the Medical Peace Foundation in Korea in order to establish a medical centre at Mokaba Village.

The Acting Vice Chancellor and Principal added that in that MOU, the Chief of Njala University Estate Department was named as a party. Njala University eventually gave a favourable response to the initiative, and the contract was awarded to construct the facility furthering that the former Vice Chancellor and Principal, Professor Abdullah Mansaray then on the 29th November, 2019 signed the contract.

He said when in early April 2020 he became the Acting Vice Chancellor and Principal of the University, he was contacted by their dynamic Ambassador Kathos Mattai who informed him of the project and shared with him lots of documentation.

The Chairman of the ceremony, the Acting Chairman of Court, Mr. Bindi recounted that Sierra Leone’s Ambassador to South Korea, H.E. Kathos Jibao Mattia had secured  funding  amounting to USD thirty –six thousand United dollar ( USD 36,000) from the Chairman of the Medical Peace Foundation in South Korea for the construction of the Madam Yoko Emergency and Trauma Care Centre at Kori Chiefdom.

He continued that medical supplies, furniture and other equipment worth thousands of dollars had already been shipped into the country from South Korea to help equip the centre when eventually completed.

Njala University, he went on, is not only keen in providing the educational needs of the host communities but also interested in providing for the health needs of residents of the host communities which according to him had propelled the University to partner with the country’s Ambassador in South Korea and the Chairman of the Medical Peace Foundation.

Chairman Bindi thanked the people of Kori Chiefdom for providing the land for the establishment of Njala University and hinted that they might have to consider providing more land to accommodate the expanding nature of the University.

Dr, Josephus Brimah, a representative of the Minister of Technical and Higher Education emphasized the justification for the construction of such a facility in the country especially taking into consideration the consequences of the eleven years rebel war and the high incidences of trauma cases in the country.

He committed the support of the Ministry of Technical and Higher Education to the project which, according to him, is in tandem with the Government’s Human Capital Development trajectory.

In his keynote address, Deputy Minister of Health and Sanitation 1, Dr. Anthony Sandi commended the Administration of Njala University for partnering with the Ambassador of South Korea to complement the Government of Sierra Leone flagship project.

He recounted that Njala University has a long history of contributing to the country’s health sector through the training of Community Health Officers and other middle and junior level health practitioners in the country.

The Deputy Health Minister announced that the Ministry of Health would fully support the Hospital with subvention and other related issues to enhance the effectiveness of the centre.

He lauded the geographical location of the centre and noted that it will help in addressing the many accident cases occurring along the highway.

The Member of Parliament for Constituency 098, Dominic Lavallie-Tshombie urged the Administration of Njala University and the contractor to make available the project document and the original designs of the project so as to put them in a proper footing to monitor the project.

Chief Executive Officer, Mogbwe Engineering and Construction Services, the contractor for the project assured the participants present that his company would execute the project in record time and will fully utilize the locals in terms of available employment.

He urged the community stakeholders to protect the property of the project so as to ensure that his company delivers as expected.

The climax of the ceremony was the pouring of libation by the elders of Kori Chiefdom to officially commence the construction process.