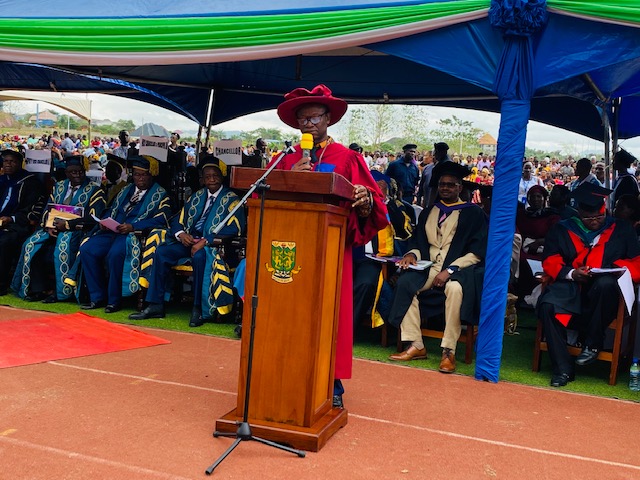 Njala University has been recognized last weekend by the Minister of Technical and Higher Education, Professor Alpha Tejan Wurie during the 14th Congregation ceremony of the University held at the Bo Mini Stadium on Saturday 9th April 2022 under the Grand Chief Patronage of Professor Sahr Moses Gevao, newly appointed Chancellor of Njala University.

Minister Wurie while delivering the keynote address recognized Njala University for hugely contributing toward the Universal Health Suffrage by training Nurses, Community Health Officers, Community Health Assistants and Public Health Practitioners who according to him undertake the bulk of the work in the peripheral and hard-to-reach communities and the respective District Health Management Teams across the country.

Despite contributing to the Universal Health Suffrage, the Higher Education Minister also aligned Njala University to two of the other Government flagship sectors of Agriculture and Education and recounted the immense contributions of the institution in training the requisite experts to service these sectors.

The Minister concluded by calling on the authorities at Njala University to take Centre stage in the Governments’ Agricultural transformation agenda by not only producing agricultural experts but to transforming such prowess to use the fertile soils and favourable climatic conditions in the country to feed Sierra Leoneans.

The Government, according to him is using over two hundred million dollars a year to import rice into the country and the intervention of Njala University to salvage this problem was critical.

He also lauded the Government for maintaining the goodwill by depoliticizing the management of higher educational institutions thereby creating academic freedom and autonomy in their operations.

The creation of the Ministry of Technical and Higher Education, according to him, was also a laudable venture by Government and it had succeeded in streamlining issues of higher education in the country.

He entreated the Njala University Administration that he is very much interested in the efficient management of the resources of the University in tandem with the Anti-Corruption Laws of the country.

Professor Gevao concluded by assuring Government that Njala  University under his watch would increasingly take visible steps to meet the demands of His Excellency the President in transforming the Agricultural sector.

Earlier on, Acting Vice-Chancellor and Principal, Professor Andrew Augustine Baimba while delivering his statement on the Theme ‘’The Role of Njala University in Complementing the Government Human Capital Agenda” highlighted the contributions of the institution in providing the requisite human resource in the agricultural, health and educational sectors over the years and the provision of expertise to Ministries, Departments and Agencies.

He praised the Government of President Bio for its continuous support of Higher Education through the allocation of 21% of GDP to the sector and the continuous allocation of subvention to run public institutions across the country.

The Acting Vice-Chancellor also pinpointed the numerous challenges facing the institution such as lack of access to the national grid which according to him is a huge burden for past and present administrations.

The institution, he went on to say is also confronted with staff and student accommodation, decent teaching and learning facilities and deplorable internal roads.

“I am aware that Government has competing priorities and this is why am turning my attention to a private partnership arrangement to solve the perennial challenges of the University,” the veteran educationist recounted.

He congratulated the graduands and urged them to be patriotic Sierra Leoneans as they venture into the universe.

The graduation of three thousand and ninety-eight students from the respective schools at Njala University is the first since President Julius Maada Bio relinquished the position of Chancellor of all Public Universities pursuant to the Universities Act of 2021.

The Acting Vice-Chancellor and Principal have been recognized in the last eight months for undertaking a back to basics model at Njala University wherein the reviving of agricultural farming, effective and accountable teaching, research and community service and strict adherence to University calendar deadlines are the new trajectories.