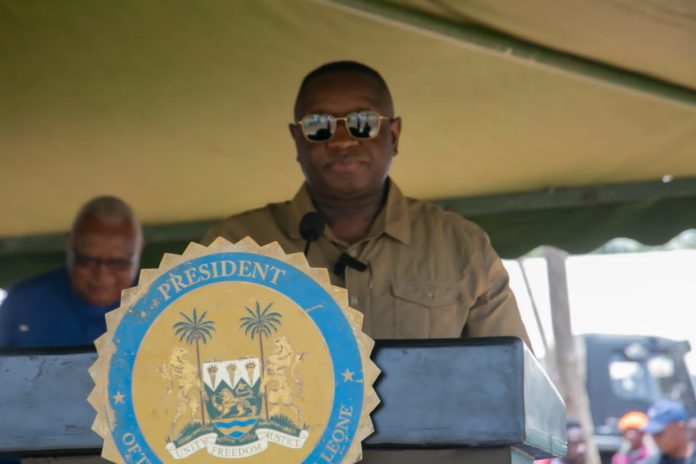 President Julius Maada Bio has on the 12th April 2022 continued his tour of the south, this time visiting Monghere in Valunia Chiefdom, Nengbema in the Naiwa Lenga Chiefdom, Ngalu in the Bagbwe Chiefdom, Njala in the Komboya Chiefdom, Ngelehun in the Badjia Chiefdom to emphasize the importance of Human Capital Development as a strong pillar for national development.

In each of those town and village meetings, the President would thank the people for their trust in his leadership and tell them that his visit was to give an account of his stewardship, adding that it was also important for leaders to share their success stories and challenges with their people.

He further stated that his vision for Sierra Leone is one that everyone would be proud of, arguing that such sustained and long-term ventures would only be rewarding by investing heavily in the people, the citizens of the State.

President Julius Maada Bio also noted that his Government had made a 22% budgetary allocation to the education sector, making it the highest any Government had allocated to education in the sub-region. He maintained that because of such a huge investment in education more than 2.5 million children in Government and Government-assisted schools had access to education in the country. He added that that had consequently caused the need for Government to add more classrooms and buildings that would house the ever-increasing number of school-going children.

“When I took up office in 2018, I allocated 21% of the national budget to education. We provided teaching and learning materials to schools and even provided food for the kids in some parts of the country. This move saw an increase in school enrolment across the four regions of this great country. Then, I saw the need to increase the allocation to 22%. We are making progress and we will continue to encourage and cater for our children for a brighter and prosperous nation that we all will be proud of,” President Bio assured.

He urged citizens in the Southern District of Bo to take farming as a way of life, saying that if only Sierra Leoneans concentrated on farming, they would be able to feed themselves and not rely on imported foodstuff. He said that the Ministry of Agriculture had provided tractors to every district of the country to help farmers engage in mechanized and large-scale farming.

“I am very happy to be with you here today in Bo District and to share with you the many developments we have done and will continue to embark on for the future of this country. Thank you very much and God bless the Republic of Sierra Leone,” he concluded.