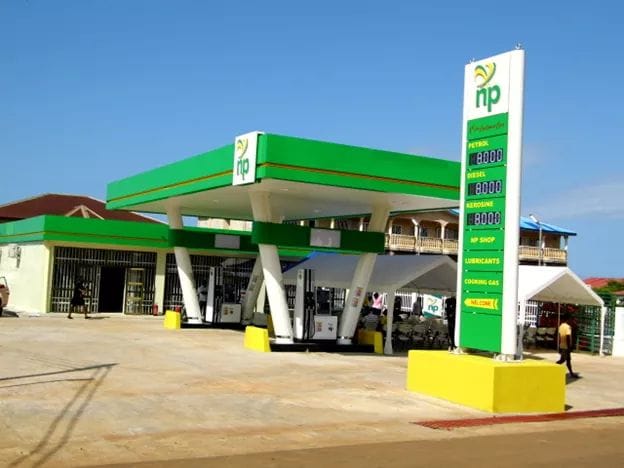 The National Petroleum Sierra Leone Limited (NP-SL Ltd) is one of the most successful business ventures that this country could presently be very proud of more especially when cognisance is taken of the fact that it is a company that is truly indigenous in the sense that it was established years back by 35 committed and determined Sierra Leoneans who, at that time, strongly hold the conviction that through hard work their investments will become an enterprising business entity. Indeed, their dream turned out to become a tangible reality as today the company is solidly forging ahead leaps and bounds with well-structured branches in the West African sub-region that are vibrantly functioning.

The success story of NP-SL Ltd ,as it had been hinted, did not materialize magically but rather the selflessness of its original founders coupled with sound managerial steering have both driven the company to reach the height it has now attained to the admiration of many near and far. NP-SL Ltd epitomizes hard work, a clearer vision, mission and making use of best ideas or initiatives in order to ensure things happen positively. Indisputably, NP-SL Ltd has been blessed with seasoned managers who, through the pragmatic injection of sound policies, took the company from its humble beginning to become a giant within the country’s business landscape.

Interestingly enough, Management of the company, past and present, did not rest on their oars after policy formulation but ensure (d) that the full implementation of those policies were and are properly implemented in order to derive the dividends aspired for. This is where the putting of premium on maximizing customer care fit in as it was not only prioritized by the company but the entity has always ensured that it is implemented to the letter. It is in this regard that the company had been striving very hard to import qualitative petroleum products which are good for vehicles, machines, generators and a host of others purposes.

To further deal with its numerous customers in a very transparent manner modern calibrated pumping machines were installed at the company’s Filling Stations displaying the quantity of fuel required as well as the price. These sophisticated modern machines have been instilling confidence in customers that they are doing business with a very open company devoid of playing games that will cheat them in order to amass as much profits. When customers have such an optimal satisfaction coupled with being treated courteously by the company’s employees then it is obvious that they will stay glued.

In order to be on top of situation, the company thought it very prudent to factor the concerns and suggestions of members of the public into its decision-making processes and such have effectively guided NP-SL Ltd to make the right choices that have helped it in its development.

Going further to give maximum convenience NP-SL Ltd introduced the use of NP Smart Card which is a latest technological gadget or device that customers can use, through financially topping up, to procure the aspired quantity of petroleum products on any working day thus making it possible to get fuel in a quick way without going through the hassle of having to wait in long queues. With this latest device one is assured of having one’s fuel on Smart Card.

Many have attested that they find using NP Gas very convenient saying it is environmentally friendly, quick and could be refilled with gas that could be bought from the company. Manufactured in various cylinders this modern cooking device could be secured at the various NP Filling stations across the country and they are going at affordable prices that can fit the pockets of many households and institutions. Those who are using it recommended it as a very useful household gadget underscoring that there will be no regrets procuring one.

In the area of enhancing the Local Content Policy it is hard to come across a company like NP-SL Ltd that is effectively doing so. This could be justified by pointing out that the company has made it a hard and fast rule that as long as there are competent Sierra Leoneans capable of performing certain tasks then they should be given priority in terms of employment opportunities instead of bringing on board foreigners who at the end of the day move out of the country with large amounts of money creating economic dislocations.

Categorically, NP-SL Ltd deserves all the accolades of a buoyant indigenous company many are proud of for its invaluable contributions to the country’s socio-economic development and significantly reducing poverty.