The National Public Procurement Authority, an institution which was regarded as dysfunctional and not an important institution for the past 14 years has now got a new lease of life in the last 18 months under the leadership of a home- grown Procurement Specialist from IPAM in the person of its result-oriented Chief Executive Officer, Ibrahim Brima Swarray.

His dedication to serve country and his workable transformative drives as well as incisive initiatives have given the Authority a new face in the public domain with regards enhancing good public procurement practices and saving the country a huge chunk of public funds that would have hitherto gone down the drain which restored hope and confidence in the World Bank, IMF and other financial institutions that indeed Sierra Leone is ready for development.

Swarray was recognized for his immense contributions to nation building by the Diaspora Focus organisation over the weekend at the Golden Tulip Essential Kimbima Hotel  where he was bestowed a prestigious award for his exemplary leadership in the public procurement sector of the country.

Before dishing out the award, one of the officials of Diaspora Focus,  Dr. Stanford, in reading the citation disclosed that within the past year the NPPA boss saved Sierra Leone almost 100 million dollars.

He further highlighted that under the watch of the NPPA CEO, modalities have been almost completed for an electronic procurement to come into force and will soon commence. The citation also mentioned the introduction of a Price Norm for the first time in Sierra Leone to ensure uniformity in the prices of goods and services. During his tenure, it was cited, he enforces the review of annual procurement plans of Ministries, Departments and Agencies to enhance planned and organized procurement processes. Again, it was mentioned that the institution has trained more than 200 procurement specialists all-over the country within Local Councils to MDAs and other key parastatals.

Asked how he feels to receive the award he responded by stating  how it gives him the motivation to do more. He pointed out that the award avails the opportunity to sit up straight and review what one has achieved, the level of professionalism they have displayed so far and how they can do things better. He said fighting corruption from a preventive arm is beyond party boundaries. “It is cheaper to prevent corruption than to fight corruption,” he said furthering that any award bagged by the institution will be used as a stepping stone to climb higher heights. He said fighting corruption by the preventive arm is like reducing political tensions in the country  and ensuring that everybody is better off .

He promised that come 2020 they will do more as an institution to bring a lot of sanity within the public procurement domain in order to derive value for money.

Many Sierra Leoneans have heaped praises on NPPA for bagging this award stating that the institution truly deserves it. Some attested that it was indeed wise on the part of President Bio to appoint a person with a sound pedigree to head such an important institution.

The NPPA CEO dedicated the award to his dedicated members of staff of the institution and expressed determination that they are willing to do more in order for the New Direction Government under the astute leadership of His Excellency the President Dr Julius Maada Bio to succeed in improve the economy and by extension the overall standards of living of the vast majority of Sierra Leoneans. 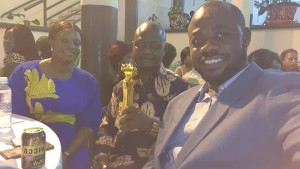