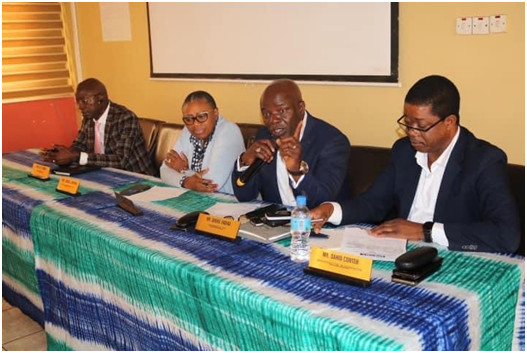 Representatives from twenty- four Ministries, Departments and Agencies (MDAs) were engaged at the Shangri- La Hall on Beach Road at Aberdeen in Freetown on the 28th June, 2022 by the Non-Tax Revenue Department of the National Revenue Authority (NRA). The engagement was geared towards informing them about a new Application that has been developed for the purpose of collecting taxes.

It must be noted that in as much as the NRA continues to build systems to automate all revenue collection channels,  it is on the verge  to automate and digitalize revenue collection processes through Mobile payment for services delivered by Government. Such services range from payment of passport forms, court fines, birth certificates, building permits, mining licenses etc.

In a statement on behalf of the Commissioner General, Jeneba J. Bangura ,the Deputy Commissioner General, hastened to clarify to Stakeholders from the MDAs that the Mobile Payment App will not be the only payment channel but it could extensively lessen the constraints especially for small service fees or court fines which are expected to be paid by people in the provinces.

The Commissioner of the  Non-Tax Revenue Department of the  NRA,  Sheki Fadika,  updated participants at the gathering on the status of the reform , expressing the view that the payment process was done manually but disclosed that such is about to be automated.

Commissioner Sheku Fadika highlighted the benefits of the Mobile App, among which he posited that with the App, reports and payments could be made on time.  He allayed the fears of some staff that the system is not intended to replace humans but will rather help to ease the burden of their job.

The Director of Finance and Budget at NRA, Joseph I. Kormoh who has had an experience with similar system, during a study tour in Kenya, shared few experiences on how important it is for an automation of such nature to be put in place to boost  non-tax revenue collection.

Along the similar trajectory, the Senior Director of Information and Communications Technology at NRA, Gerald P. Ganda and the Senior Director of Modernization, Sahid Conteh, who moderated the session respectively, shed light on the security features of the system and the efforts made by NRA to enhance tax and revenue compliance.

High point of the engagement was when the Service provider of the Mobile App, Blue Ribbon, made a practical PowerPoint demonstration of the features of the Payment Application and the means through which those payments are to be done. The Service Provider stated among other things that Orange Money, Afro money, Automated Teller Machines (ATM) will also be used as conduits means through which payments for services could be made.