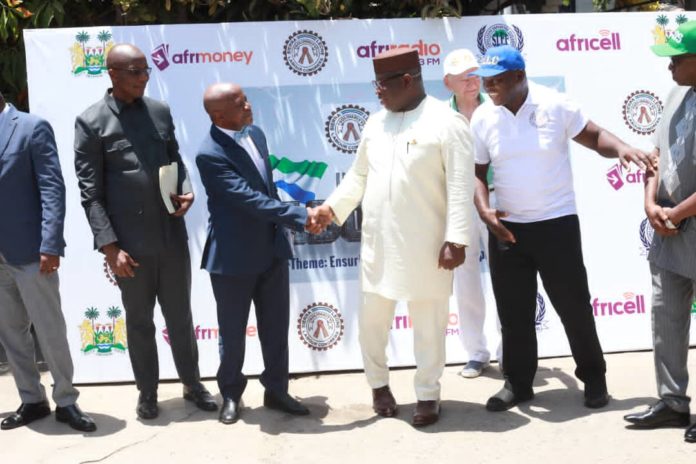 Celebrating Labour Day also popularly known as May Day, which happens to be the 1st of every May month in the year, stakeholders converged at the Family Kingdom Resort at Aberdeen in Freetown on the 3rd May, 2022 to mark the day during which occasion the keynote address was delivered by President Julius Maada Bio.

In his capacity as Chairman of the Sierra Leone Employers Federation, Ambassador Kobi Walker extended  fraternal greetings to all in attendance thanking  God for sparing  lives to gather again this year in order to commemorate the 2022 May Day.

He also conveyed special thanks  to the President and his Government for taking proactive measures which, according to him, largely prevented a second wave of the COVID 19 pandemic in the country which  he said almost brought advanced countries to a standstill during the closing months of 2021.

Amb. Kobi Walker said no sooner had we thought the world had some respite then the Russian  and Ukrainian crisis started on the 24th of February 2022, a  crisis  which he stated has  significantly affected  supplies of petroleum products and wheat to Africa in particular and the world in general.

He pointed out that recently, there has been increased cases of COVID-19 leading to infections of people in Shanghai  and other cities in China which are important trading partners with Sierra Leone saying all of the recent developments have had a profound effect on the economy of Sierra Leone

The Chairman pointed out that the latest economic forecast on the Sierra Leone Economy  can be seen from the Monetary Policy Statement of 5th April 2022  issued by the  Monetary Policy  Committee of the Bank of Sierra Leone which met on the 30th March 2022  from which he said he will reference and quote:

According to Statistics Sierra Leone, by exit March 2022,the annual National Consumer Price Inflation (year-on-year) stood at 22.06 percent points from 17.59 percent in February 2022.

The MPC statement affirmed that Global commodity-price inflation (especially fuel and food), high freight charges, the overall global negative supply shock created by the Russian – Ukranian crisis and the uncertainties surrounding the COVID-19 pandemic suggest that inflationary pressures are expected to persist in the near period.

The resultant increase in domestic fuel pump prices, which is bound to raise production costs economy wide, may most likely impose adverse consequences for domestic prices. In a nutshell, inflationary pressures are likely to persist in the near term.

According to the Monetary Policiy statement issued by Bank of Sierra Leone, Real Gross Domestic Product growth is expected to be stronger (5.0 percent), supported by an expected increase in activities in the agriculture, manufacturing, services and mining sectors.

However, the Russian-Ukrainian crisis and the ensuing sanctions regimes the Western powers have imposed on Russia, have heightened global economic uncertainty, which could significantly weigh on global economic recovery and commodity markets. This development may have an adverse impact on economic growth, especially for small open economies like Sierra Leone. It is believed that actual RGDP growth during 2022, more likely than not, will fall below its forecasted value of 5.0 percent.

The MPC noted the reduced supply of foreign exchange from exports ,FDIs  and other sources of inflows in the face of increased demand  for the importation of essential goods especially fuel and food. In particular, given the high unfulfilled demand for foreign exchange for the importation of key commodities (most prominently, fuel and food), the committee (set up by the Central bank to review monetary policies) is of the view that the demand pressures will lead to a significant depreciation of the Leone in the near future. Given the high pass-through effects of exchange rate depreciation on domestic prices, this will lead to higher prices, which will potentially negatively impact living standards of especially the poor.

The Federation however welcome the recommendations of the Monetary Policy Committe to the Directors of the Central  Bank for the creation of two  Special facilities which will provide foreign exchange  for the importation  of commodities that fall within the special facilities i.e

Kobi Walker said it is instructive to mention that the Federation will work assidiously with NASSIT, ILO and other related and relevant stakeholders to actualize the establishment of the informal sector scheme.

He said he has gone on record to inform the public that NP (SL)Ltd recorded losses in quarter 1 of 2022 of over SLL 60bn due to some of the reasons adduced above adding that  equally so, employers in varioius sectors are also registering collossal losses in their businesses operations and activites.

He said in summary, Employers are  facing challenges in terms of: Increased  inflation which can potentially reduce demand for goods and services offered by their members, Higher cost of foreign exchange for importations saying the proposed establishment of the two special facilities for employers through the Commercia lBanks willassist  tremendously, the need to encourage commercial banks to provide bridging loans at affordable cost of capital to shore up the current dwindling working capital of employers and businesses, the current wave of shortage of electricity and water are adding to cost of production saying most employers have to resort to frequent use of generators and purchases of water from water bowsers owners and operators saying they are confident that will be addressed soon, Disruption in Global Supply Chain and the attendant consequencies and ramifications on  businesses, Increased Freight Charges  saying they  understood  from the Sierra Leone Association of Importers that average cost of container-Ex China are now as follows:

Kobi Walker said the Employers have weathered the storm during the COVID 19 pandemic with the assistance of Government and their Employees adding that they  expect  such a cooperation and positive collaboration to continue  .

He said Employers, notwithstanding the above, are currently reviewing the Collective Bargaining Agreement with the Hotel and Entertainment Industry Trade Group and the Industrial Trade Group Council.

According to him, that coupled with the Draft Labour Laws, which he said  will be validated soon, are in line with the Theme for this Year ‚‘‘Ensuring Fairness at the Workplace.‘‘

He concluded  by congraulating all including the President who are workers further thanking all for their kind and rapt attention and wishing God blessings on all and the land that we so love, Sierra Leone.