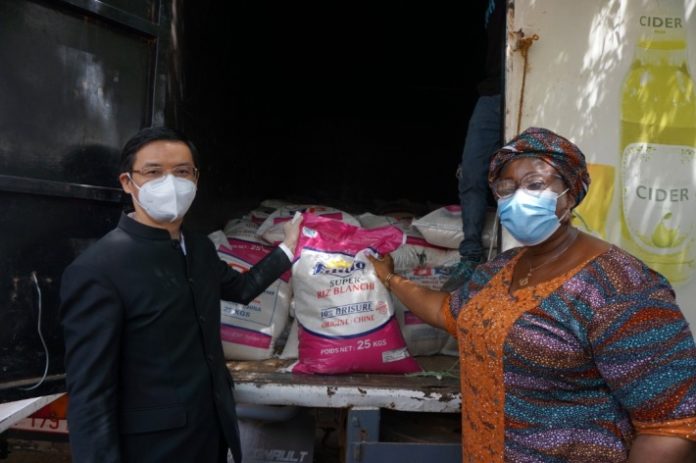 The Chinese Embassy in Sierra Leone has donated food items which include 800 bags of 25kg rice, 200 cartoons of 5L cooking oil, 200 bags of 25kg flour, 400 bags of 1kg sugar and 8,000 facial masks to the Muslim Community. The handing over ceremony took place on the 28th April, 2022, at the Ministry of Social Welfare’s Conference Hall situated at New England Ville, Freetown.

Before handing over the food items the Chinese Ambassador to Sierra Leone, Hu Zhangliang expressed his delight to be present on the occasion. He furthered that as the country celebrates its 61st Independence Anniversary, he would like to use the opportunity to express his warmest congratulations and wished the Republic of Sierra Leone and its people happiness and prosperity.

“I wish to congratulate H.E. President Julius Maada Bio, the Sierra Leonean Government and People for the efforts made in promoting religious harmony and national cohesion,” he said adding how the achievements in advancing the well-beings of the Muslim community are also notable.

The Ambassador maintained that Muslims have been observing the Holy Month of Ramadan by displaying religious loyalty, strict self-control and sharing love, care also underscoring that   in few days time they will be celebrating the traditional Muslim festival of Eid-al-Fitr.

He used the opportunity to wish all  Muslims “Eid Mubarak” in advance.

He revealed that as a friendly gesture and on the advice of the Ministry of Social Welfare, the Chinese Embassy decided to donate the following items to the Muslim community through the major Muslim and Islamic organizations in the country.

“We know that over 70% of the population in Sierra Leone are Muslims and our Muslim brothers and sisters have done a lot in promoting the development of China-Sierra Leone relationship,” he also stated intimating that he wished that the  donation will help the religious organizations to provide support to the less privileged persons and communities.

The Ambassador stated how over the past five decades, the China-Sierra Leone relations has been constantly enhanced on the basis of sincere friendship, equality, mutual trust, mutual support, mutual benefit and win-win outcomes.

He revealed that, since 2018 alone, the Chinese side has helped the Sierra Leonean side build or implement about 20 projects or programs,  stating that, all of which brought substantial benefits to the Sierra Leonean Government and People.

The Ambassador disclosed that since the start of the year, the Chinese side has cooperated with the Sierra Leonean side in commencing the rehabilitation of the National Stadium, commissioning 4 Mobile Clinics, the Myohaung Officers Mess and Single Officers’ Quarters, handing over a batch of water bowsers, fire engines, and vehicles adding that the two Governments have also signed a new Agreement on Economic and Technical Cooperation.

He mentioned that, although China and Sierra Leone practice different social and political systems, the two countries are genuine friends and equal members of the international society, also stating that the two sides have been cooperating closely in international affairs, effectively upholding international equity and justice as well as the common interests of the developing countries.

“I wish to take this opportunity to thank the Sierra Leonean Government and People including all the religious organizations for the valuable support to the Chinese side in matters related to China’s sovereignty, territorial integrity and dignity,” he said.

On her part, the Minister of Social Welfare, Bendu Dassama, expressed appreciation to the Chinese Embassy for what she described as a kind and timely gesture.

She continued that the donation  means a whole lot especially in this month of fasting and praying adding how it is also the month of giving especially to the less privileged .

“The Ministry has nothing to do with distributions as year in and out we always ensure that the Muslim leaders themselves do their    distributions,” she stated their position maintaining that they only step in to help with the planning with the avowed objective to ensure that the less privileged benefit from what has been donated.

She applauded the Embassy and the Chinese Government for their countless development support to the country and for always showing up when they ask for their assistance. She requested that they undertake more and more projects as there is so much to be done in the country.

The National Secretary General of the  Supreme Islamic Council of Sierra Leone, Sheikh Ibrahim Barrie, said on behalf of his colleagues , they do consider it an honour to witness the handing-over ceremony of the food items that was graciously donated by the Chinese Ambassador to the Muslim Community.

“We are very happy to receive these items and we appreciate the support that the Embassy has been giving to the country,” he said adding that the occasion is very timely because it is coming during the holy month of Ramadan, and especially during the last ten nights of fasting..

He appreciated the Ambassador and the Government of China for the great support that they have been giving, not only to the Muslims but to the people of Sierra Leone as a whole. 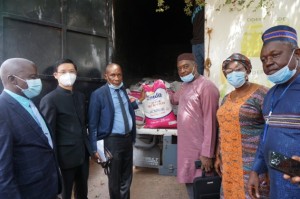