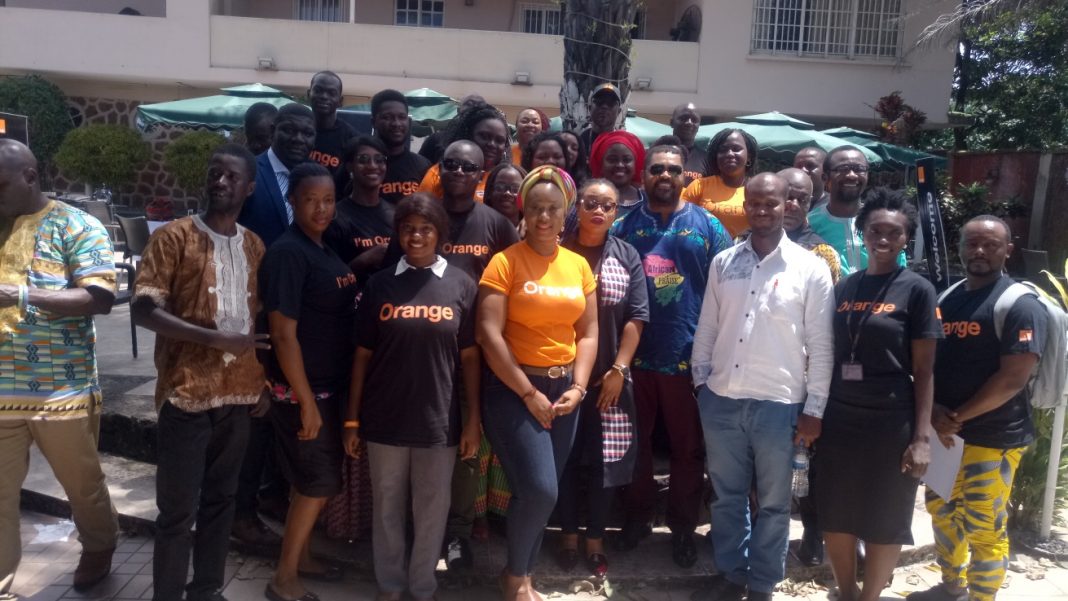 Orange Sierra Leone, a result-oriented GSM mobile operator, has on Friday 11th October, 2019 briefed media practitioners about the company’s achievements and immediate plans. The disclosure by the company was made during a quarterly Press Conference held at Bliss Restaurant on Wilkinson Road in Freetown.

In her address to media practitioners, Head of Public Relations, Orange-Sierra Leone, Annie Wonnie Katta, dilated on how Orange is globally recognized as a multi- service provider in Sierra Leone for the past three years, and already they have stamped their innovative footprints in the country.

She furthered how progress made over the past three years has merely laid out the foundation for the rolling out of their wider ambition which is to introduce and implement new technologies for businesses of all kinds across the country.

She also stated that since the inception of Orange’s operations in Sierra Leone, the company has invested about $112 million dollars in the areas of networking, modernization and expansion of human resources as well as in rolling out its Corporate Social Responsibility.

“Orange has invested about $96 million dollars in modernizing and expanding its network infrastructure and remains committed to provide the best telecoms services in Sierra Leone to ensure its customers get an unmatched experience,” she revealed noting that the Company has embarked on network expansion investment to add to the 247 sites inherited from Airtel.

“We constructed 45 new sites in 2017 and 42 in 2018. In the beginning of 2019 the company committed to construct an additional 55 new sites. Today, it has completed 34 out of the 55 sites committed in 2019, thereby connecting more than 1,170 new localities, with thousands of Sierra Leoneans now accessing data, voice and financial services for the first time,” she maintained.

Annie informed how the company can comfortable boast of the owner of 367 sites across the widest network coverage in Sierra Leone covering about 74% of the country’s population. She stated that in respect of human resources, Orange has invested about $16 million dollars in the last two years.

“The company prides itself in capacity building by ensuring that its employees benefit from trainings to ensure retention and provides exposure opportunities to other Orange affiliates,” media practitioners were told.

She continued by stating that Orange-Sierra Leone, being a multi service provider and responsible corporate citizen places emphasis on corporate social investment.

In the last two years, according to her, the company has invested about $400,000 dollars mainly in the areas of women empowerment, health, education and the environment. She noted that Orange-SL still remains the first operator in Sierra Leone to contribute to the Government’s free quality education (FQE) agenda by pledging the sum of $1.5 million in material assistance over a period of five years beginning from 2019.

The Head of Public Relations continued by saying that Orange-SL will be launching their Orange Social Venture this week during which innovation, entrepreneurship and leadership will be featured. She added that on the 31st May Orange-SL in partnership with the Directorate of Science, Technology and Innovation (DSTI) launched their first coding school in Sierra Leone with an estimated cost of about 2.75 billion Leones also disclosing how the coding school will commence in December 2019, with the aim to train youths in coding and other software skills in readiness for the country’s digital transformation and to foster entrepreneurship, reduce unemployment as well as develop the country’s in innovation ecosystem.

She assured the nation that they will continue to use their network asset and strength by being the first movers always in the introduction of interesting offers, products and services, noting that two weeks ago they launched “Chacha”, a non-binding and non-commitment daily subscription offer that gives 10 minute talk time that starts immediately after subscription and by dialing 808 subscribers can benefit from their daily, weekly or monthly offers.

Our aim is to give people what is really essential in their lives and relevant to their localities with international standards, providing them with an unmatched experience and the platform to grow,” she expressed optimism.