Orange Sierra Leone in partnership with the Ministry of Information and Communications has on Thursday 24th October, 2019 commissioned the newly rehabilitated Sierra Leone News Agency building (SLENA) on Wallace Johnson Street in Freetown.

In his address to the audience, Minister of Information and Communications, Mohamed Rado Swarray said that when he took over as Minister the Sierra Leone News Agency building (SLENA) building was in a dilapidated state and as a Minister he was very concerned.

He further revealed how he was able to approach Orange for their partnership in order to make the building habitable hammering that Government is committed to ensuring that they empower the media and also create an enabling working environment for journalists.

He applauded Orange for its support in making this dream become a reality. Admonishing the Management and Staff of SLENA he entreated them to always ensure that their work is professionally done within the realm of informing the populace on current happenings.

Chief Executive Officer of Orange Sierra Leone, Aminata Kane Ndiaye, praised the Ministry of Information and Communications for celebrating with them the commissioning of the newly rehabilitated SLENA building for media practitioners, noting that this is part of their commitment in contributing towards nation building.

In another development Orange Sierra Leone has on Wednesday 23rd October, 2019 donated 200 sanitary pads to the Government Technical and Vine Memorial Secondary Schools in Freetown in fulfilment its USD 1.5 million commitment in supporting the Free Quality Education initiative.

Head of CSR of Orange Sierra Leone, Desmond Spaine, while distributing the items, noted that in August, 2018 while President Bio was lunching the Free Quality Education scheme, Orange Sierra Leone made a commitment of boosting the scheme with USD 1.5 million dollars in terms of material supports within a five year period.

According to him, Orange Sierra Leone and the Ministry of Basic and Senior Secondary School Education have designed five projects in line with the pledged USD 1.5 million dollars highlighting that the distribution of the menstrual hygiene pads is just one of the five projects. He noted that they at Orange are hugely concerned about the menstrual hygiene of girls in schools and hence they contracted the service of Girl Child Network Sierra Leone who have produced the pads and are also delivering sensitization talks to schools on the direct relationship between menstrual hygiene and teenage pregnancy.

Madam Anita Koroma, Chief Executive Officer and Founder of Girls Child Network- Sierra Leone, commended Orange and emphasized that the issue of menstrual hygiene management had been very poor towards addressing teenage pregnancy and other related issues. She urged the girls to responsibly use the hygiene pads for their intended purposes and according to her, the issue of menstruation was inter alia a no-go- area for the girls and boys. She called on boys to support girls during their menstrual period noting that the issue of menstruation was keeping girls out of schools for a whole week. At the Vine Memorial Secondary School, members of the Female Parliamentary Caucus witnessed the ceremony to lend their support to Orange Sierra Leone for coming to the aid of girls going through their menstruation period.

Haffie Haffner, Head of Legal Affairs, Orange Sierra Leone in her keynote statement, said they are in collaboration with the Ministry of Basic Primary and Senior Secondary Education to design projects that will see them expand the 1.5 million dollars in support of the free quality education agenda within a period of five years. She also noted that the provision of two thousand (2,000) hygiene pads to twenty schools in the Western Area for 2019, is the start of a project which will see the distribution of 10,000 hygiene for a period of five years is just one out of five projects Orange Sierra Leone will be rolling out.

Haffie Haffner spoke of the other projects which, according to her include super coding for schools; open Classroom for over one thousand teachers, provision of  one thousand solar packs for one thousand village schools and the building of five laboratories for schools that will win the inter secondary debating and quiz competition. All of the projects, she noted, will be implemented. She concluded by noting that all over the world Governments cannot do it alone. The private sector, she maintained, is pivotal to support the Government project and this, according to her, is what Orange Sierra Leone is now demonstrating.

Veronica Kadi Sesay, President of the Parliamentary Female Caucus, encouraged the girls to keep away from sex and concentrate on their studies. She noted that they as female Parliamentarians are ready to support their continued growth and empowerment.

The climax of the ceremony was the presentation of the hygiene pads to the Principal of  the Government Technical Secondary School and Vine Memorial Senior Secondary School respectively. Both Principals lauded the efforts of Orange Sierra Leone and assured them that they will do all within their power to ensure that they support the Girl Child while they are going through their menstrual period in schools.

Orange said they are targeting eighteen (18) schools in the next one week and it is expected that a total of 1,800 hygiene menstrual pads will be distributed. 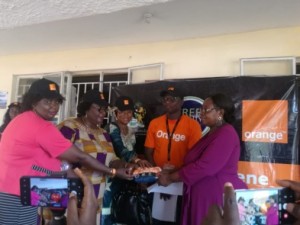 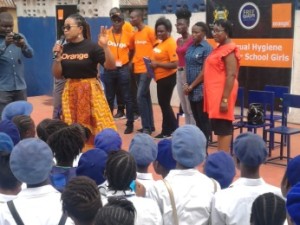 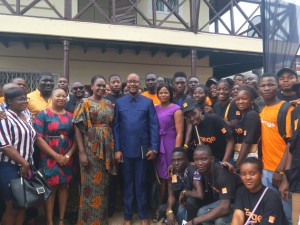