To complement Government’s strides to enhance and expand innovation and technology in the country, one of Sierra Leone’s leading mobile operators, Orange-SL in partnership with the Ministry of Basic Secondary School Education,  STFoundation Bridge the Digital Divide-Sierra Leone has on Wednesday 19th February 2020 launched the Super Coders Project at the Annie Walsh Memorial Secondary School in the East End of Freetown.

Present were the Chief Executive Officer of Orange-SL, Aminata Kane Ndiaye, the Principal of the Annie Walsh Memorial Secondary School, President of Sierra Leone Female Caucus in Parliament, Hon. Veronica Sesay and other Members of Parliament, Director of STFoundation Bridge the Digital Divide-Sierra Leone, Mohamed Dumbuya, Staff of Orange-SL and pupils of the school.

In her address, the Chief Executive Officer of Orange-Sierra Leone, Aminata Kane Ndiaye, disclosed that Orange being a multi service provider and a responsible corporate citizen places emphasis on corporate social investment, adding that in the last three years, Orange has invested about $ 400,000 mainly in the areas of women empowerment, health, education and the environment and that the Company remains the first operator in Sierra Leone to contribute to the Government’s Free Quality Education (FQE) Agenda by pledging the sum of $1.5m in material assistance over a period of five years.

“Orange in partnership with the Ministry of Basic and Senior Secondary Education (MBSSE), designed five projects. One of such projects is the Super Coders Scratch Program in which Orange in partnership with STFoundation intends to introduce ICT training on basic coding for children in 100 Secondary Schools with existing ICT labs over a period of five years,” she disclosed.

She said that the implementation will be done in two phase;

 First batch of 10 schools has commenced on Wednesday 19 February 2020 for the next ten days in various Government-assisted schools with ICT labs across the country.

She noted that the Super Coders Scratch Project is an introductory ICT training program for children between ages 9 to 16 years pointing out that Scratch is a computer programming language. She said in Scratch, programs are made by joining together colored blocks using the Mouse. These groups of blocks (called script) tell characters on the Screen (called Sprites) what to do. Scratch is free, safe and fun to experiment with.

She stated that with Scratch, children can make their own interactive Stories, Animations, Games, Music, and Art further revealing how Scratch has large collections or libraries of cool graphics and fun sounds to play around with which enable children to solve real life social issues through coding and animation.

Aminata Kane maintained that coding once introduced in related schools by Orange, will be included in their ICT curriculum and will be taught by the ICT tutors in each school. She reiterated how many would recall that Orange commenced the execution of its FQE project in October 2019, where the company distributed 2,000 hygiene packs to 20 schools in the Western Urban and Rural areas, conducted awareness and sensitization on menstrual hygiene and sexual reproductive health, adding that this year, Orange-SL will roll out all five projects before the end of 2020.

“As a global telecoms player operating in about 22 countries in Africa and the Middle East, Orange aims at being the leading partner in the digital transformation of all our countries of presence. In achieving this ambition, Orange has included education as one of its key pillars under its CSR policy,” she underscored.

Director, STFoundation Bridge the Digital Divide-Sierra Leone, Mohamed Dumbuya, expressed appreciation to Orange-Sierra Leone for partnering with them in order to implement the Super Coders Scratch Project in secondary schools in the country.

He also buttressed and reiterated that the Super Coders Project is an introductory ICT training program for children between ages 9 to 16 years adding that the union, marriage or partnership they are enjoying was created by UNICEF-Sierra Leone by introducing the two parties and brought them together.

She said STF/BDD-SL has been working in providing ICT education for schools and higher learning institutions in Sierra Leone for the past 10 years and within those periods of operation over 145,000 Sierra Leoneans have benefited.

Hon. Veronica Sesay, President of Sierra Leone Female Caucus in Parliament extended thanks and appreciation to Orange-Sierra Leone and STF for the implementation of the project. She encouraged the targeted beneficiaries to make maximum use of the program adding that they will continue to support Orange-SL in rolling out programs that are meaningful and beneficial to the children of this nation. 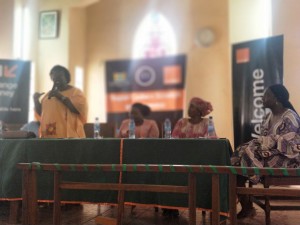 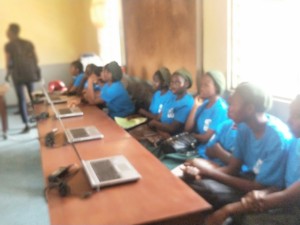