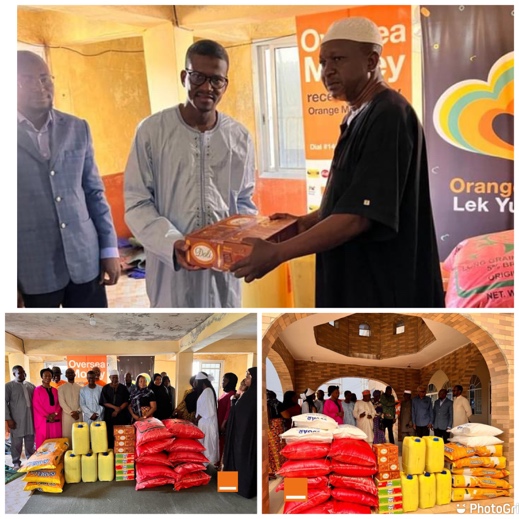 As was done in the past years, with the avowed view of consolidating and maintaining the existing bond between Orange-Sierra Leone, as a telecommunications company and its numerous subscribers as well as extending love during this Holy Month of Ramadan, the company on the 20th April 2022, supported Muslims worshipping at Ilmozikri and Masjid Al Karim mosques respectively with a donation of assorted food items worth millions of Leones.

Led by the company’s Chief Executive Officer,  Sekou A Bah and other senior officials, a symbolic handing over of the assorted food items to Muslims residing at Hill Station and IMATT where the two mosques are situated.

Among the donated food items to both mosques were 10 bags of rice, 5 bags of milk, 5 gallons of cooking oil, 7 bags of sugar, and several cartons of tin tomatoes and maggie among other cooking ingredients.

Head of Public Relations at Orange-SL , Madam Annie Wonnie Katta, stated how  it is not the first time Orange-SL is giving out a donation of such magnitude disclosing how such is a usual practice during this period. She continued by maintaining that as a company, they are aware of the Holy Month of Ramadan and the blessings that the fasting period brings not only to the givers but also those in need of such donations.

Madam Annie Wonnie Katta underscored that it is the responsibility of Orange-SL not only to give the best in telecommunication services, but to also address or respond to societal issues, adding that helping Muslims during the Holy Month of Ramadan is a major way of fulfilling their societal commitment.

Receiving the items on behalf of the IlmoZikre Jamah, the Chief Imam, expressed profound gratitude to Orange-SL for its continued support to the Masjid over the years, adding that Orange-SL, well known as a ‘Kombra Network’ will always stands by them during the Holy Month of Ramadan by dishing out huge donations worth millions of Leones.

He intimated that the relationship with the telecommunications company had been very cordial over the years with both sides mutually benefitting.

The Imam divulged that the value of charity has been one of the strong pillars of Orange-SL family and that they are very happy to be part of such a family.

“I want to express my appreciation to the CEO of Orange-SL for being present during the presentation and prayed that God will bless the lives of all staff of Orange-SL,” he stated.

He added that this is the very first time in the history of the Masjid that they have received such a donation from the telecommunications company. He described the donation as timely and life-saving maintaining that the food items will last them until the end of the Ramadan period .

He added that the donations came at a time when they were preparing for the “Lalatugadri” ceremony and expressed his happiness over how the donated items will help his community people.

The CEO of Orange-SL, Sekou Amadou Bah officially presented the donated items to the two mosques. Both events were followed by Muslim prayers.