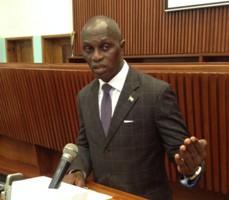 One of the Defence Lawyers for Retired Major Alfred Palo Conteh in the just concluded treason trial, Joseph Fitzgerald Kamara, has revealed that collectively the Defense team will today Monday 6th July 2020 lodge an appeal against the Judge’s decision to convict their client on two out of the sixteen count charges.

Lawyer Kamara furthered that the law required that they should file an appeal within twenty one days and they would be doing a bail pending appeal to get their client out of custody while the appeal commences.

He added that the Defense team believes that Palo being a first time offender and so should not be given a maximum sentence because the offense is a misdemeanour and not a felony, and that the Judge did not address his mind on the sentencing guidelines before sentencing Palo.

Lawyer Kamara mentioned that the Defense argument is that State House is not a public place but a restricted area, adding that a public place is where a person would enter and come out freely without restriction.

He added that Palo’s pistol is not loaded, because a loaded weapon is when the bullet is inside the chamber, but in Palo’s case the magazine carries ten rounds and all ten rounds were met in the pistol.

Lawyer Kamara said even the Head of Presidential Guard at State House revealed in court that the gun was not ready for fire.

He said Palo lost possession of the pistol after he entered State House by handing over the pistol to the security officers at the desk and there is a difference between ownership and possession.

Lawyer Kamara added that for the Judge to say owning two weapons for a minute is a crime is not correct drawing an analogy  to the license of vehicle in which one would be given grace period, and that the license of a pistol is  given to the owner of the gun and not and not the gun.