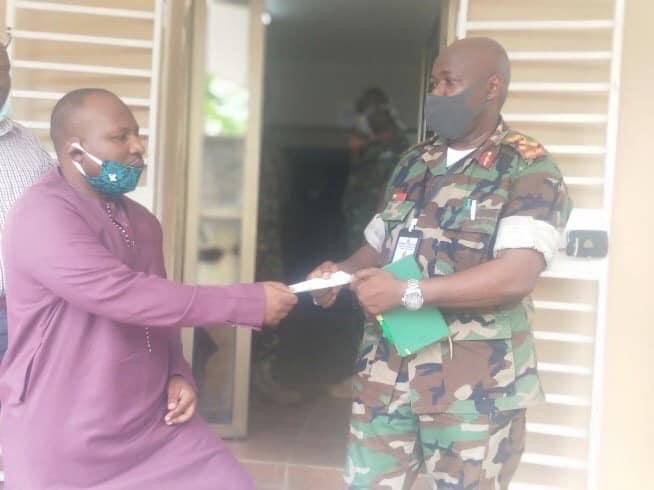 “I am not trying to show-off as some may want to think but rather as a patriot who is dedicated to serve my country I decided to respond to a national call in the face of a global pandemic in order to complement the commendable strides that the Government, led by President Julius Maada Bio, is taking to combat  the spread of COVID-19 in our beloved country,” these were the exact words of the Chief Executive Officer  of Pavi Fort Road Construction Company-Sierra Leone, Alimou Barrie during a snap interview with The Calabash Newspaper.

This snap interview came in the wake of the just concluded donations of cash, personal protective equipment and bags of rice to all the sixteen provinces within Sierra Leone by Pavi Fort-SL, led by its CEO Alimou Barrie. According to what Alimou Barrie intimated this medium he spent the sum of two billion Leones to undertake the donations in all the sixteen districts in the country.

The exercise started in Freetown on the 27th May 2020 when the CEO of Pavi Fort and his team donated the sum of fifty million Leones (Le50, 000,000) and PPEs including 5,000 face masks, 100 gallons of hand sanitizer (1 gallon) worth a total of Le. 120,000,000 to the Government of Sierra Leone through the Emergency Operations Centre (EOC). The handing over ceremony took place at the Emergency Operations Centre (EOC) situated within the SLFA compound in Kingtom, Freetown.

In Koinadugu and Falaba Districts, on the 30th May 2020, Pavi Fort Construction Company donated forty million Leones (Le40M), five thousand Face masks, fifty gallons of hand sanitizers to the Koinadugu and Falaba District Emergency Operations Centers and ten million Leones for both the Paramount Chiefs of both districts at a ceremony held at the Koinadugu District Youth Council Hall in Kabala.

The company on the 6th,7th and 8th June 2020, Pavi Fort –Sierra Leone donated cash ,bags of rice and Personal Protective Equipments worth millions of Leones to the Kailahun, Kenema, Kono and Makeni Districts COVID-19 Emergency Response Centres (DICOVERCs) in order to scale up the fight against the spread of the coronavirus in the aforementioned districts.

In Kailahun District they handed over 70 bags of rice, 10 million Leones, 4,000 litre of sanitizer and 3,000 facial meant for the residents of the district.

When they reached Kenema District the team donated a 10 Million Leones cheque, 30 gallons of sanitizer,4,000 pieces of face masks, 100 bags of butter rice were donated to the DICOVERC and 20 bags of rice to the local chiefs.

The Pavi Fort team, headed by CEO Alimou Barrie, then proceeded to do another donation in Kono District where they handed over a Forty Million Leones (Le40M) cheque, 150 bags of rice and Personal Protective Equipments (PPEs) to the Kono District COVID-19 Emergency Response Centre (DICOVERC) in Koidu Town on the 7th June 2020 geared towards the containment of the spread of the coronavirus in Kono.

The leading indigenous road construction company in the country, Pavi Fort Construction Company on the 8th June 2020, led by its dynamic and charismatic Chief Executive Officer, Alimou Barrie, landed in Bombali District, Northern Sierra Leone where they handed over a Twenty Million Leones (Le20,000,000) Cheque, 50 bags of rice,20 gallons of sanitizer and 3,500 face masks to the District COVID-19 Emergency Response Centre (DICOVERC) in Makeni meant for scaling up the fight against the spread of COVID-19 in that part of the country. An additional ten million Leones (Le10, 000,000) and 20 bags of rice were also handed over to the local authorities in order to facilitate their movements, coordination and activities in containing the spread of the deadly virus.

From Makeni, the team headed North to Karene District on the 13th June 2020, where Alimou Barrie presented a cheque of Twenty Million Leones (Le20, 000,000), 80 bags of rice, 30 gallons of sanitizer and 5,000 face masks to the District COVID-19 Emergency Response Centre (DICOVERC) at Gbintie Town in Karene District. He clarified that the donation including cash, medical items and 80 bags of rice (50 kgs) worth 110 million Leones were meant to facilitate the fight against the corona virus within their respective chiefdoms in the district.

Also, as part of his goodwill gesture to the people of Kaffu Bullom Chiefdom, Lungi, CEO Barrie, handed over a 10 million Leones cheque,  2.5 million Leones cash, 50 bags of rice, 2,000 face masks worth 70 million Leones  as social mobilization support to contain the spread of the disease in that part of the country.

The Pavi Fort CEO and team handed over a cheque of 20 million Leones, medical items including 2,500 face masks, 100 bags of rice and 25 gallons of hand sanitizers totalling 100 million Leones.

Chief Executive Officer, Pavi Fort- Sierra Leone, Alimou Barrie said out of the total amount donated the 10 million Leones cheque, 70 bags of rice, 25 gallons of hand sanitizers and 2, 500 face masks were meant for the Kambia DICORVERC to break the chain of transmission of the virus. He furthered that the 10 chiefdoms in the district will also benefit out of the balance 10 million Leones cheque and 30 bags of rice to fight the disease by stakeholders in the respective communities in that part of the country.

“In the area of enhancing social mobilization of traditional authorities within the district the company is also offering a 10 million Leones cheque and 30 bags of rice to the authorities in order to combat the disease in the district,” Alimou Barrie stated.

The CEO and team landed in Moyamba District on Monday the 22nd June 2020 where they donated a 10 million Leones Cheque, 100 bags of rice, 20 gallons of hand sanitizers, 5 million Leones to the traditional authorities in the district and 2,000 pieces of face masks, all totaling 80 million Leones.

When the team led by its dynamic CEO, Alimou Barrie, was finally in Pujehun District, which was the last destination, on the 23rd June 2020, they donated a huge consignment comprising 20 gallons of hand sanitizer, two thousand (2,000,000) pieces of N95 face masks, 100 bags of rice and a cheque of ten million Leones (Le10, 000,000) and five million Leones cash (Le5, 000, 000) to the District COVID-19 Emergency Response Centre (DICOVERC) in Pujehun District.

In all the districts that the donations were made the District DICOVERC officials, who received them on behalf of Government as well as the local authorities showered profuse praises on the Chief Executive Officer of Pavi Fort Road Construction Company –SL, Alimou Barrie, for what they unanimously described as his patriotic gestures.

The CEO of Pavi Fort, Alimou Barrie, still talking to this medium, noted that he is not a wealthy man but rather saw it compelling to serve humanity diligently expressing hope that , when we continue to right things, very soon we would see COVID-19 as a thing of the past so that the Government will pay more attention to development programmes and individuals resume their work itinerary.

“We all need to abide by all preventive measures so that we avoid contracting the virus,” he admonished.

Most of those whom this medium talked with to sound their views on this latest move by Pavi Fort Road Construction Company profusely commended the CEO saying this country needs individuals like CEO Alimou Barrie if rapid development should transpire. “I am really impressed by the selflessness of the CEO. It’s really mind touching.  To be very frank there are others who are capable of doing same but out of selfishness, greed and fear of not wanting to be exposed are refusing to do so. I doff my hat to this great Sierra Leonean,” a foreign diplomat confided in this medium. 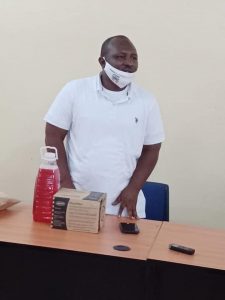