At the Home Suites Hotel, Bintumani Drive, Aberdeen in Freetown on 17th June, 2020 the Minister of Planning and Economic Development, Dr. Francis Kai-Kai said the Wan Fambul National Framework (WFNF) model is critical to the enhancement of Government’s peace and national cohesion agenda at local level and it will sustainably support community, district and national planning in Sierra Leone.

He made that statement while addressing participants at the 2-day retreat organized by Fambul Tok in partnership with the Ministry of Planning and Economic Development (MoPED), Ministry of Local Government and Rural Development and the Catalyst for Peace to develop the Wan Fambul National Framework for inclusive governance and local development, under the Vice President’s Office. The framework would bring devolution to the next level by linking it to the National Development Plan, thus bringing development to the doorstep of the people of Sierra Leone.

“I am especially happy that we are today starting to effectively implement the post-2019 UN General Assembly’s agreed actions on taking forward the roll-out of the Wan Fambul Framework across the 16 districts and 190 chiefdoms of Sierra Leone. The relevance of this model had convinced the Government of Rtd. Brigadier Julius Maada Bio to capture it in the Sierra Leone’s Medium Term National Development Plan (2019-2023), under Cluster Four, “Governance and Accountability for Results,” said Dr. Kai-Kai.

He thanked Fambul Tok and the Catalyst for Peace, including  his colleague Ministers for making the process become a reality.

In her statement, the Deputy Minister of Local Government and Rural Development, Melrose Kargbo, said the WFNF was deeply linked to the residual Truth and Reconciliation Commission’s recommendation around peace building and national transformation. She said Government remains committed to the process and would support and facilitate the institutionalization of the framework.

John Caulker, the Executive Director of Fambul Tok, noted that the framework would facilitate an inclusive, community-centered, rural sustainable development leading to resilient and cohesive communities across Sierra Leone. He said the framework would address the critical issues of National Development, through a People’s Planning Process.

Libby Hoffman, the President for the Catalyst for Peace, in her statement, through a Zoom video link, explained the global significance of the role Fambul Tok played, noting peace should be built from the inside out and creating the space for those impacted by the violence to lead in the building of peace. She said this would help the world learn from their stories.

The retreat was followed by a Technical session on governance establishments, which includes the steering, technical committees and secretariat and was moderated by Dr. Emmanuel Gaima, the Governance Adviser to President. 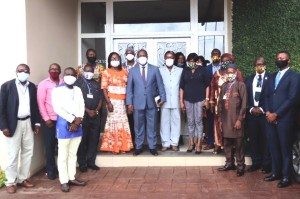