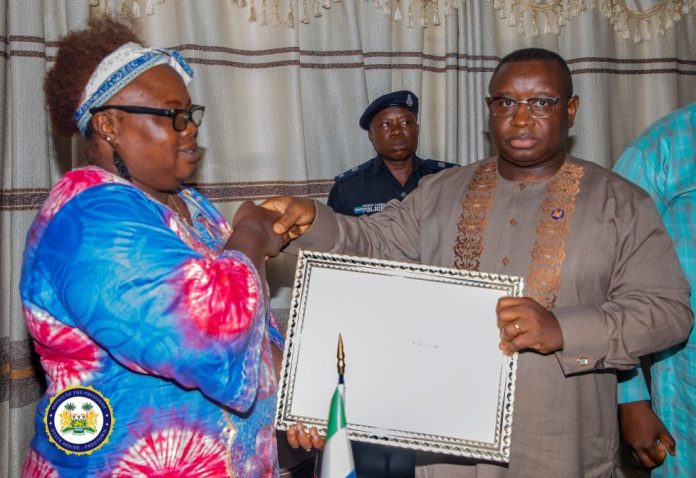 On the 4th September, 2019 Dr. Julius Maada Bio received an award from the Executive Members of the Sierra Leone Labour Congress (SLLC) at State House. The team also showed appreciation for the achievements of his New Direction Government.

Making his presentation, President of the SLLC, Genna Wright, said they were pleased with the strides of the Government underscoring how they were impressed with the gains made in less than two years. He said they believe in the convention of social dialogue with Government and in the interest of the country.

The SLLC Chief also commended President Bio for delivering on his promise by adhering to Sierra Leone’s subscription to the International Labour Organisation (ILO) adding that that had helped to restore the country’s voting right at the ILO after fifteen years. He stated that the amount of money paid by Sierra Leone to regularize its status at the ILO was a big achievement by the Government.

In his brief response, President Julius Maada Bio expressed gratitude for the recognition, adding that he was happy to meet with the SLLC, which constitutes a large number of the country’s population, to discuss issues relating to the development of the country. He said developing Sierra Leone would require the support of everyone and therefore encouraged the SLLC to continue being partners in the development process.