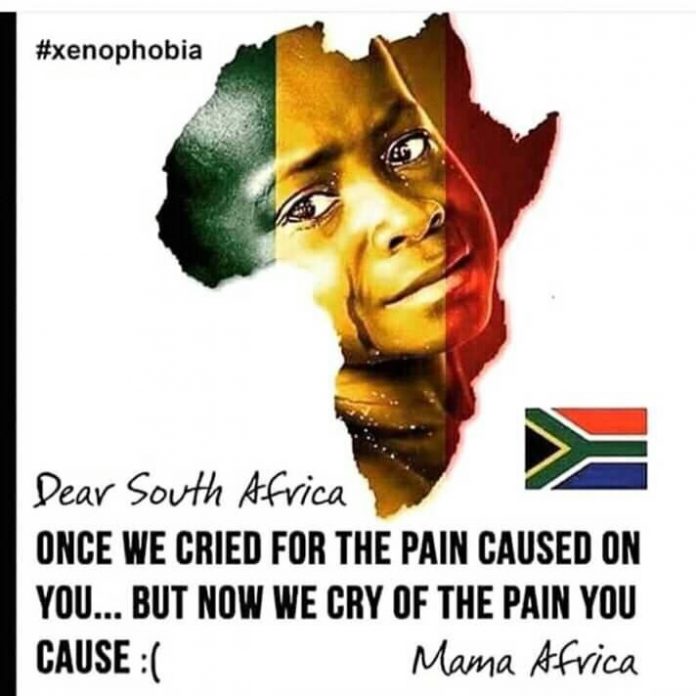 The Society of African Journalists (SAJ) has come out to strongly condemn the xenophobic attacks on African nationals living in South Africa.
SAJ Acting President, Michael Adeboboye said the organization watched with sadness cases of arson, looting, murder and other forms of atrocities meted to Africans living in South Africa and warned that if not curbed would assume a bigger dimension.
Adeboboye called on the South African government, police and other security agencies to do more in preventing attacks on brother Africans and bring perpetrators of the heinous attacks to book adding that SAJ would not condone crimes allegedly committed by Africans living in South Africa.
According to him “it is also incumbent on the South African Government, police and other security agencies to bring to book all those found guilty of violating the laws of the land.
“Aside from that, South Africa is being reminded to take into account the continental spread of South African businesses which operate freely without persecution and repatriate their profits unencumbered by raging hordes of the citizenry of the countries in which they operate.
” Thirdly, in the spirit of the recently signed African Continental Free Trade Agreement whose aim is integrating the continent into a monolithic market place to benefit all the signatory nations, the current events and the seeming lack of political will at dealing with the chaos sends a wrong message.
“In the same way, the  government, police and other security agencies of South Africa must be proactive and do more to protect the lives and properties of African nationals living in that country .
“Regrettably it has been noted by SAJ that since the beginning of the year, politicians across the divide with notable exception of the EFF have attempted to score cheap political points by blaming the problems of South African society on foreigners and not addressed the governance and structural issues underpinning the discontent of South Africans.
“Any further attacks on Africans must be considered as being tantamount to genocide and that would be totally unacceptable”
Adeboboye also tasked  journalists in South Africa to be fair in their reportage of the ongoing killings in the rainbow nation stressing that it is the duty of the media to push narratives that would discourage  violence towards foreigners  and present the factual picture which illustrates the mutuality of pan African trade and how their nation does indeed benefit from cordial relations with brother nations on the continent.

“This is a critical media role of educating those ignorant to the facts” he said.
He also warned that further cases of violence would alienate South Africa from the rest of Africa and may even lead to reprisal attacks which according to him, also not good for Africa .
“Finally, for balance it would be remiss for SAJ not to encourage the governments of Africa to remove the blemish of failed economies which may be a major contributor to the restlessness and migration of Africa’s people as they seek greener pastures. SAJ feels burdened as members of the Fourth Estate to strongly urge that African leaders deliver better governance and economic management. The current scenario is abysmal.”