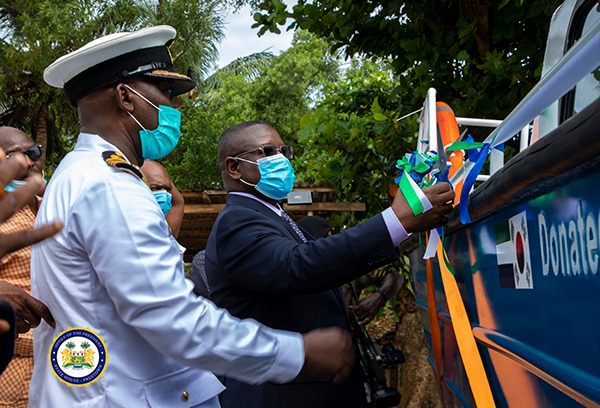 Commander of the Maritime Wing, Captain Navy Philip Juana, told the ceremony that the role of the Navy is to protect the territorial waters and its ecosystem, adding that the task is difficult to perform because their military wing does not have the necessary platform to effectively function.

He explained that the boats came at the right time, noting that the gifted patrols craft would be used to protect the waters in the country.

Chief of Defense Staff, Lieutenant-General, Sullay Ibrahim Sesay, registered his profound appreciation to the Government and people of South Korea for the donation. He noted that the general peace and maintenance of the rule of law within the territorial waters of Sierra Leone had been undermined by piracy, sea robbery, illegal, unreported and unregulated fishing.

“To that fact, I would like to stress that the gifted patrol craft will leverage the flexibility of our Maritime Wing to switch between the two principal roles in supporting all national efforts at achieving our defense and developmental aspirations,” he explained.

While handing over the inshore patrol craft, a representative of the South Korean Ambassador, Mr. Kim Sung Nyeon, commended the President for the strong leadership he had exhibited and his Government’s tremendous success in the fight against COVID-19.

“And now, Korea is proud to deliver four speedboats to Sierra Leone. It is our hope that today’s contribution will not only help Sierra Leone’s effort to build up its maritime capabilities, but it will also make our friendship grow stronger,” he noted.

In his statement, President Julius Maada Bio said as a nation, Sierra Leone had to contend with large scale plunder of her marine resources through illegal, unreported, and unregulated fishing.

He noted that within the country’s 200-mile Exclusive Economic Zone alone, such illegal, unregulated, and unreported loot by foreign vessels, were estimated to have cost the small West African nation over 26 million dollars in revenue loss, thousands of jobs, loss of livelihoods for coastal and other communities that could otherwise benefit from an agile fishing industry, and great shortage of fish on the local market.

“There is a threat to food security, livelihoods, economic development, and sustainable fisheries management that our small nation can ill-afford.

“Add this to the millions of dollars lost to other such illegal activities as tax evasion; under-reporting of fish catch, and overfishing of our waters that degrade our marine environment and strip local fishing communities of their livelihoods, and the real cost of these illegal acts by illegal foreign vessels mounts,” he said.

He emphasised that the country would no longer afford the cost of such criminal activities as unregulated immigration, contraband smuggling, narcotics, human trafficking and labour rights, robbery at sea, and sea piracy.

“These collectively undermine the rule of law and the steady economic gains we are making as a nation.

“I must also note that our brave men and women of the Sierra Leone Navy and members of the maritime agency are first responders in search and rescue operations when boats are stranded or stricken at sea. We cannot afford to lose precious lives in more sea accidents.

“These Inshore Patrol Craft, gifted by the Government and People of the Republic of Korea, will help us greatly to start addressing some of these foregoing challenges.

I want to therefore thank the Government and People of The Republic of Korea through Your Excellency, Mr. Lee-in Tae,” he said.

The President assured that Sierra Leone would also commit to working within the Korea-Africa Framework of Cooperation, 2017-2021, in order to enhance cooperation on trade, manufacturing, industrial development, agriculture, telecommunications, human resource development, science and technology, infrastructural development, and the blue economy, among others.

“I also want to thank the leadership of the Ministry of Defence for their relentless efforts at augmenting the capacity and training of our armed forces. I thank you for your commitment to working towards achieving my Government’s goal of revitalizing the Joint Maritime Committee (JMC) and implementing effective and sustainable surveillance and security systems in Sierra Leone’s waters,”

He concluded by officially commissioning the four Inshore Patrol Craft (IPC 01, 02, 03, and 04) into service.