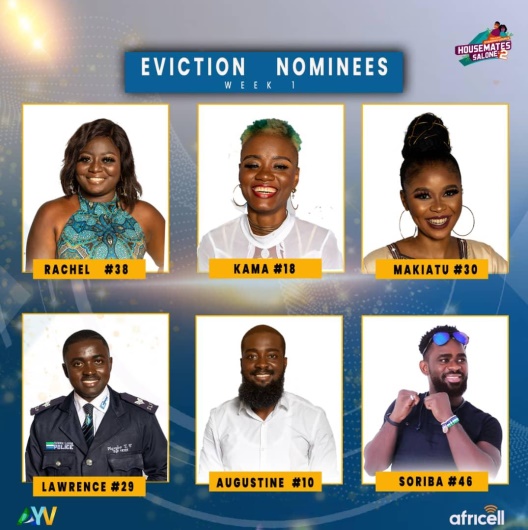 Housemates Salone is gaining momentum and the episodes so far exhibited have got a lot to be enmeshed in watching one of the best Reality TV Shows that is brought to your screen courtesy of Africell and AYV Media Empire.

However, it is important to note that to keep them in the House, viewers must vote for them. In other words their survival to be in the House largely depends on the voting public. Make use of this opportunity now by sending SMS messages or vote via the number of any of the Housemates to 5500 or Dial *5500#. For International voting call: +23299005500.

What the 22 Housemates have started battling for is to bag the star prize of Two Hundred and Fifty Million Leones (Le250M) plus undertaking a round trip to Dubai. But apart from bagging the Star Prize, all other participants will be entitled to their daily allowances of Le100, 000 each whilst they still remain in the House and accumulatively given to them whenever they are evicted.

Interestingly, during a particular stage of the Show, based on the percentage of votes scored by a particular Housemate, such will determine whether he or she will be either evicted from the House or make it to the grand finale. As the show progresses, evictions will continue until the ultimate winner emerges.

As they are now in the House, the Housemates are expected to appear sexy and display some form of nudity which should not come as any big surprise as the show is tailored in that way.

Again, seeing them talking harshly is simply because they should be using strong language intermittently and acting funnily is acceptable because it is expected that they must be humorous.

The organizers of this much talked about show, the Africa Young Voices (AYV) and Africell, with support from certain corporate entities have bagged a long list of praise for putting together such a thrilling and breath-taking Realty TV Show with many saying it is indeed a show that is well organized and going on fine which according to those views it is interesting to watch on AYV Television Channel 34.

If again the show is becoming lively and catchy it is the role being played by the intriguing Invisible Chief with the commanding baritone voice giving intermittent instructions to the Housemates to carry out certain assignments or to ask them to articulate themselves well by responding to questions posed.
It is in this regard that the TV Reality Show is considered to be the conduit of youth empowerment