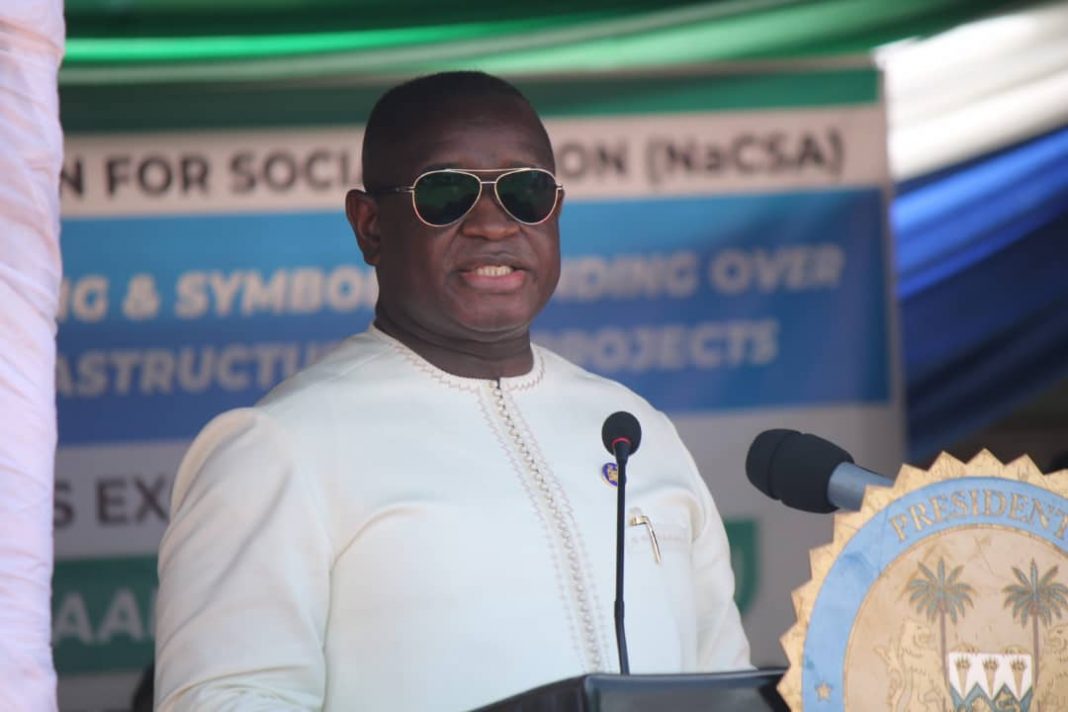 The SLMB Primary School, as part of 30 infrastructure sub-projects, was done by the National Commission for Social Action (NaCSA).

President Bio said the best investment to give to any child is education, adding that his Government has decided not only to build schools in Freetown, but in all the villages of Sierra Leone, thereby enabling children to go to school no matter where they find themselves.

According to him, quality education cannot go without food and good health, noting that such was why his Government has been also building health centers, providing ambulance services and the best drugs to those centers, and also enhancing local food production.

“Gbinti alone has two schools, with furniture, electricity powered by solar energy, water facility and quarters for the head teachers. We want the people to take ownership of these accomplished projects,” he said.

He warned parents not to support their children to cheat in examinations, while calling on everyone to sacrifice today in developing the nation and enjoy tomorrow.

NaCSA’s Commissioner, Abu Bockarie Kokofele, said the 30 infrastructure sub-projects were funded by President Bio’s Government with support from the Islamic Development Bank (IDB), adding that these projects were done in nine districts and 14 chiefdoms in Sierra Leone.

“NaCSA had advertised the rehabilitation of 310 kilometers of feeder roads nationwide and we provided the sum of 70,000 Euros each to local councils for the maintenance of those feeder roads. The institution had also constructed 10 grain stores in the country, which will enable farmers to store their grains after harvest,” he explained.

He disclosed that with support from President Bio’s Government, during this COVID-19 pandemic, NaCSA provided food and physical cash to 10,000 persons with disability (PWDs), and cash to 29,000 petty traders across the country so as to cushion the economic impact of the pandemic on them.

The NaCSA boss said his institution has constructed 11 primary schools with modern facilities, 11 community health posts, 10 VIP toilets, disclosing that nine of those projects were funded by the Government of Sierra Leone.

First Lady, Madam Fatima Bio, said any Government that prioritizes education is a serious one, noting that the people should send their children to school to acquire education especially when this Government has declared a free quality education.

She warned against rape, domestic violence and other sexual offences, while calling on parents and community authorities to report any of these happenings within their localities.