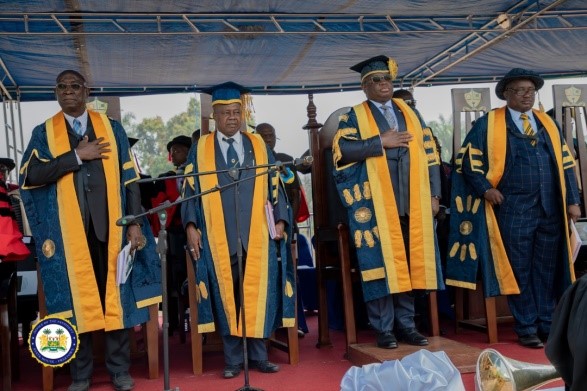 On 25 January 2020 at  Magburaka, Tonkolili District, His Excellency, President Dr. Julius Maada Bio, told the first-ever congregation to be  held in that town that his Government will soon restore the lost glory of the centres of learning excellence in Magburaka Boys High School and Mathora Girls School.

In his statement during the Convocation and Graduation Ceremony at the Ernest Bai Koroma University of Science and Technology, he assured that: “My Government will soon demonstrate that commitment by completely refurbishing Magburaka Boys School and Mathora Girls High School, improving their administration and management, and thus improve learning outcomes for students to truly outstanding levels. That’s the crop of students we want to provide to this university. And so, this University’s bright start today portends a very promising future, a glowing tradition, and an outstanding place in this nation’s development.”

President Bio also expressed how very proud he was of each graduand, adding that he had adopted the Free Quality Education as a central baluster of his government’s human capital development priorities.

“Most of you may be the first in your family or community to enter university; first in your family or community to acquire university education. That may be well and good. Ask yourself the next logical question: ‘How can I be the first to make a real difference in the lives of my family, my community and my nation?’ That is both a question and a challenge,” he said.

He challenged the congregation to wager the possibility with him by asking: “What is the likelihood of the 33rd of 35 children whose father died when that child was only 4 years old; that child was brought up by an illiterate mother; that child grew up in a small dusty village without shoes, pipe-borne water, electricity, or a telephone… What is the likelihood of that child attaining a superior education with several degrees and serving his community and his nation as a teacher, a soldier, and a President? That is my story.”

He stated that that was a story of character wrought out of adversity, of personal resilience and faith in spite of dire circumstances, of the abiding belief that challenges were temporary and everything was possible as long as one was determined to achieve that.

The President said that the graduating 5,597 young people had motivated themselves against all odds to succeed at the university, saying he wanted them to go beyond mere motivation to make a real difference in their families, communities, and the nation.

He added that they must set their goals around a disciplined approach to achieving those goals, warning them that opportunity and success might not look for people or come through mere luck or coincidence.

The President said that successful people were those who found and made use of the opportunity, adding that he was, therefore, challenging the graduands to find and use opportunities in the private sector in order to enhance their own lives, grow the economy, create jobs, and be whatever they wished to become.

“I challenge you to innovate, add value to the ordinary and the everyday and make the lives of others and yours better. Dare and do! That is the stuff that success is made of. So as you leave here today, I challenge you to map your pathway to success and achieve success with resounding honours.

Pro-Chancellor, Dr Brima Kargbo, said that they were pleased to welcome the President to their first-ever congregation ceremony. He said that in less than two years of operation, their presence had been felt everywhere in the country, adding that they had also been able to identify with the President’s drive for quality human capital as the basis for development.

Vice Chancellor and Principal, Professor Edwin J. Momoh, said that the presence of the President was a manifestation of his commitment to human capital development. He noted that their staff development was designed to assist the management in meeting new demands of Higher Education at a time of knowledge extension, information sharing and open system thinking. 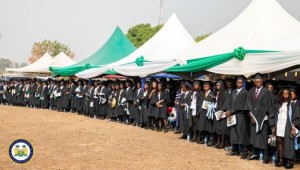