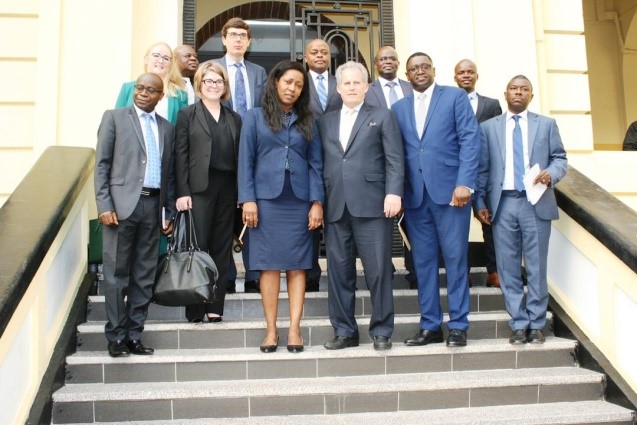 In his maiden visit to this country on 27 January 2020 the First Deputy Managing Director of the International Monetary Fund (IMF) Mr David Lipton stated that the Fund is very pleased to be supporting Sierra Leone.This was made known when he paid a courtesy call on the Minister of Finance at his Treasury Building Office.

Mr Lipton said that the International Monetary Fund is very pleased to be supporting Sierra Leone and they want their programs to help Sierra Leone to make progress, noting that he is seeing the President putting emphasis on delivery which according to him is a very good and important message. He stressed the importance of delivery in governance and regarded it as the ultimate objective.

According to him, for Government to put in place the important building blocks to achieve delivery sometimes takes a long time and it cannot be immediate, adding that he hopes to engage the Government on those building blocks.

“Very importantly, the Government needs to be developing strong enough potential for the mobilization of domestic revenues so that it doesn’t end up overborne by debt,” he advised.

He said this visit is an opportunity for him to visit some of the subjects that the Government is placing emphasis on such as  education, human capital development, technology and infrastructure.

“I hope to gain some insight here, and to hear also about your development plans and I also hope to exchange views with a wide range of people including those in Government,” he said

Representing the Minister of Finance, Deputy Minister (1) of Finance Dr Patricia Lavalie commends Mr David Lipton and team for the visit and regarded the visit as very timely one.

“We just came back from a cabinet retreat two days ago and we believe that our performances are on track. The retreat was quite a very good one and the President essentially injected a new energy into the senior leadership team. So coming at this time is very timely,” she said.

The First Deputy Managing Director of the International Monetary Fund (IMF) Mr David Lipton undertook series of activities while in Sierra Leone which include meeting with President Julius Maada Bio.

The other activities include visiting a local public school with briefing on the Government’s flagship, briefing on new National Innovation & Digital Strategy, presentation of the Proposal for Fund’s Anti-corruption Challenge, lunch with local business community and civil society, met with Governor Kelfala Kallon, and met 4Her, an organization supporting women and girls at risk to make donation on behalf of “IMF Giving”, before he departed on Tuesday 28th  January.