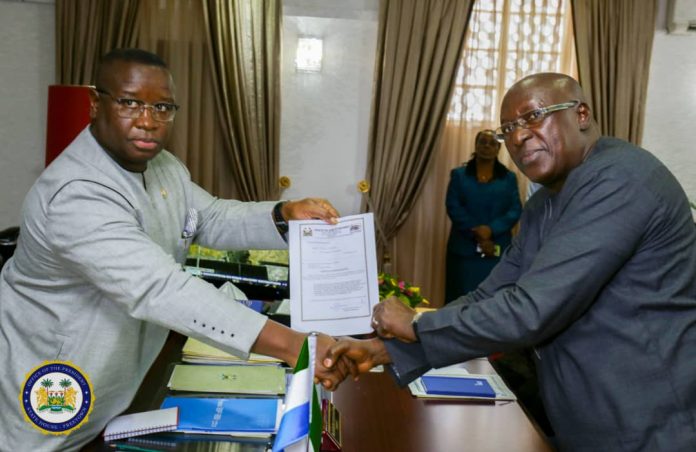 The Leader of Government Business in the House of Parliament, Honourable Sidi Mohamed Tunis, has presented to His Excellency President Julius Maada Bio the Certificate of Approval on the Proclamation of a State of Emergency regarding Rape and Sexual Violence during a brief ceremony held at State House.

During the presentation ceremony, the Member of Parliament said that: “Your Excellency sir, having gone through Parliament, I hereby present you with the Certificate of Approval of the Proclamation on the State of Emergency on Rape and Sexual Violence.”

In his brief response, President Julius Maada Bio said he was pleased that Parliament had done their bit of the work to translate his words into action.

He said he was very passionate and cared about the welfare of everyone in the country, adding that he had already made a commitment on rape and sexual violence that had been well received both locally and internationally.

He also thanked Members of Parliament for approving the Declaration and expressed hope for their continued support in implementing the other parts of the Declaration.

It could be recalled that earlier this month, President Julius Maada Bio officially declared a National Emergency on Rape and Sexual Violence, Pursuant to Section 29 (3), Act No. 6 of the 1991 Constitution of Sierra Leone.